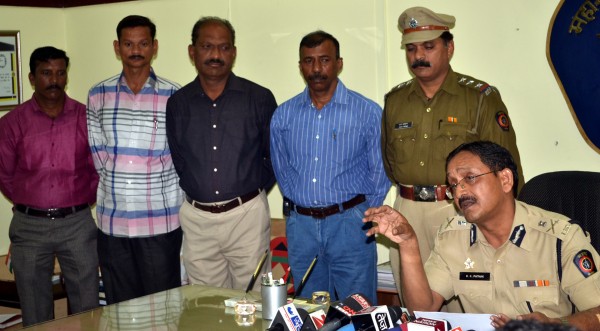 Nagpur Today: The Police Commissioner K K Pathak organized a press conference at his office to inform about the successful operation in which the police department cracked the double murder case and all the accused have been arrested. It may recalled that a young man named Nitin Narayan Tirode and his friend Nitin Thakur were returning home on their Hero Honda motorbike no MH 31/ BR/ 5164 were attacked by unknown assailants with sharp swords and were killed on the spot near the board of Jai Durga Ma Housing Society, on the Outer Ring Road, at Vihirgaon falling under the Hudkeshwar Police Station on January 4, 2014 at 22:30 hrs.

Understanding the sensitivity of the crime and the impact this double murder will have on the denizens of the city, the Nagpur Commissioner of Police directed all the police stations to activate their informants. This move helped in solving this crime. The activation of the informants of Hudkeshwar and Kalamna Police Station yielded its desired effect and the police officers got information that one of the guys they know had a small beard below the lower lip called Sanju used to be involved in many waylaying cases.

The cops came to know that Sanju was admitted in the Government Medical College & Hospital and that he is in a critical condition. The informants also informed that he had a friend who used to be his accomplice in waylaying people. His name was Gulu. This information gave a direction to the investigating officers of the Kalamna Police Station and from 8:30 pm to 12:30 am (in the night), the cops arrested the accused one after the other and solved the case. 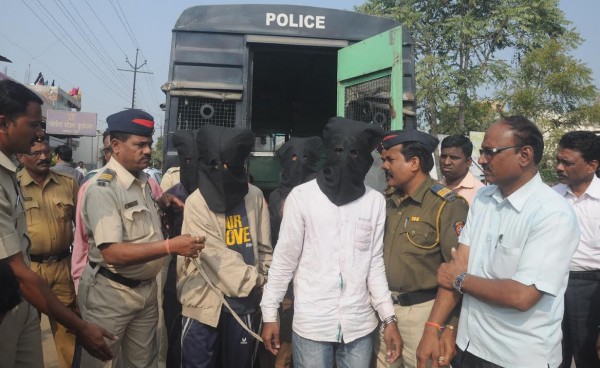 Sustained interrogation revealed the entire modus-operandi. The cops said that in all their years of service as policemen, this murder seems to have been the most cruel one. They said that during interrogation, they learnt that Sanjay was such a cold blooded and cruel person that even after looting the person or victim, he will deliberately attack him with the knife or sword. In the double murder case, he used a serrated knife which had serration on one side, while the other side was very sharp. He had plunged the sword into both the victims and had practically gouged out their intestines.

What happened was these five accused were on three motorcycles. Sanjay Pardi @ Sanju and another accused were riding on one of the motorcycles. They first way laid the first person on the same road a few meters away and after attacking him, they escaped from there and then they waylaid the two persons, killed them and were on their way back to the city. When the first person lodged a complaint with the Hudkeshwar Police Station, he related how one of the accused had pleaded with another accused calling him Sanju and said “Sanju mat mar” (Don’t kill), He said that other accused who was asking Sanju not to kill had a small beard like growth under his lower lips.

After killing these two innocent victims they were escaping at a great speed. Since Sanjay was drunk, he lost control of his vehicle and fell down. He suffered serious injuries to his head (the frontal portion of his skull had broken and had gone inside). Sources in the police department said that the doctors who were attending to Sanjay opined that he is critical and would die at any moment. The remaining accused just deserted him and escaped from the scene.

The informants had told the cops that Sanju is one of those who are involved in such cases in the past too. The cops realized that Sanjay is in the GMCH and in a critical condition. The informant then told the cops that he had a close accomplice called Golu. They also informed his present location. When the cops arrested him, and put him through sustained interrogation, he spilled the beans and informed the cops of all the accused who were involved in the double murder. The Commissioner of Police K K Pathak was very pleased by the DB (Detective Branch) Squad of Kalamna Police Station and announced immediately after the Press Conference that the entire squad be given a reward of Rs 5000:00.

During the press conference, he assured the media that the percent of penalization of criminals have gone up to 22%. He claimed that they have the most number of MPDA cases registered (7cases) and many MCOCA cases to ensure gang free city.

He invited all suggestions to ensure proper traffic control and other measures to maintain law and order in the city. He also said that he will increase citizen participation in crime control operations.