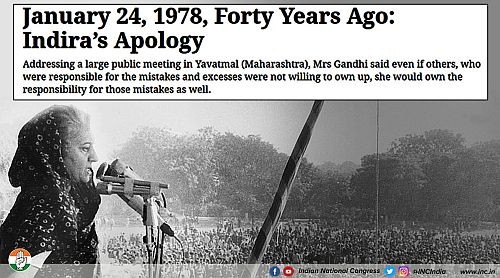 Congress leader Anand Sharma responds to the ongoing rhetoric by the BJP and the PM on the Emergency.

Addressing a meeting organised by the Bharatiya Janata Party to mark the Emergency anniversary, Modi said the day needs to be observed to re-dedicate oneself to protection of the Constitution and democracy.

Yesterday, Arun Jaitley had blogged on the Emergency saying he was the first Satyagrahi and had compared Indira Gandhi to Adolf Hitler.

Sharma today reacted with a series of tweets:

“Indira Gandhi was the tallest leader of her times, democratically elected popular Prime Minister. Arun Jaitley’s comparison of Indiraji with Hitler is absurd, outrageous and a distortion of history.

“Indira Gandhi’s elected government was sought to be destabilized by unconstitutional and undemocratic methods. Emergency was an aberration and Indira Gandhi had herself expressed regret.

“Arun Jaitley is suffering from selective loss of memory. Dictators do not hold elections. Let BJP be reminded that Indira Gandhi lifted emergency to hold free and fair elections. She herself lost and she accepted defeat, and the verdict, with humility.

“Arun Jaitley’s and the BJP’s obsession with Hitler is understandable. He comes from the RSS-BJP school who celebrate Hitler and eulogize Fascism, advise to read Golwalkar or have courage to denounce it.

“The debate was decisively settled in 1980 when the people of India brought Indira Gandhi back with a thumping majority and dumped her tormentors and opponents in the dustbin of history.

“What India is witnessing today is a systematic subversion of all institutions that uphold our constitution and democracy under the watch of an authoritarian Prime Minister and arrogant government, leading to centralization of power, authority and decision making is ominous.

“History has recorded with respect Indira Gandhi’s contribution, courage and sacrifice. Liberation of Bangladesh and biggest victory of any army after Second World War can not be forgotten. India became a nuclear and space power. BJP – RSS can not insult her memory or belittle her Martyrdom. People of India will remember her as a hero.”

Ahead of Sharma, the Congress had tweeted yesterday, “It takes a great leader courage and humility to acknowledge one’s mistakes and learn from them.” The party posted this picture alongside with the tweet.