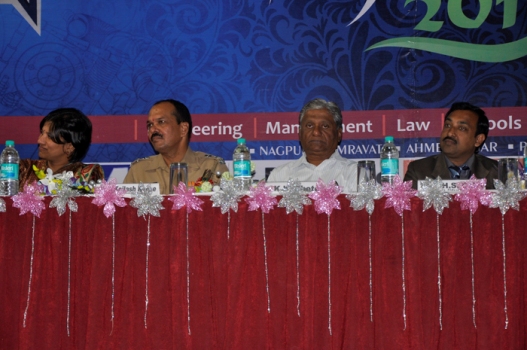 The inauguration ceremony of Antaragni-Technorion 2013 , the annual fest of G.H.Raisoni College of Engineering was held on 27th Feb . The event marked the beginning of the cultural and technical extravaganza which will last till 3rd march. The Chief Guest for the ceremony was Mr. Kailash Kanse Deputy Commissioner Nagpur police. The other dignitaries present were the Guest of Honour –Mrs. Aasawari Shenolikar– Deputy Editor The Hitawada, Dr. P.R.Bajaj– Director GHRCE, Dr. K.K. Dhote– Director RGI group.

The ceremony started with the premier of a short Film “Making of Antaragni –Technorion 2013”. This was followed by the ceremonial lighting of the lamp and Saraswati Vandana.  After the dignitaries had taken their place on the dais Technorion President- Nakul Shelgaonkar gave the annual technical event report and the annual cultural report. Gathering In charge  Prof H.S. Dalvi then summarized all the events that took place over the past year. 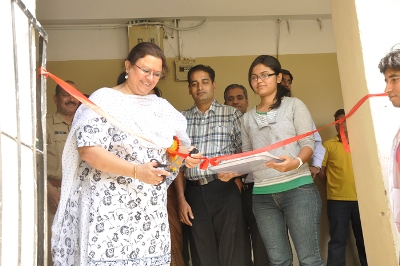 After the speeches, Chief Guest felicitated Dheeraj Dwivedi a student of GHRCE for his bravery as he warded off a gang of thugs who were eve teasing near Yashwant Stadium.

The Chief Guest and Guest of honour were then presented with a memento and a floral bouquet. 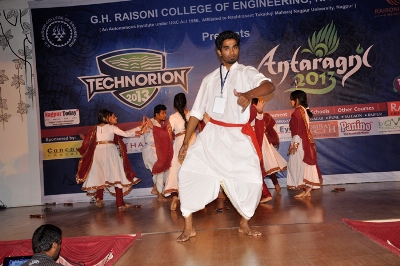 The formal vote of thanks was given by Prof.A.D. Tete Gathering Co-In charge. The programme was compeered by Ms. Anamika Sawarkar and Mr. Ajinkya Kulkarni.

The inauguration ceremony was followed by various interesting competitions which included technical and non technical events that started with much fervor and gusto. The highlights of the day were, the mud race, boat race, box cricket and rock show. These events saw the students participating in huge numbers. The boat race was won by Piyush Dharmik(mechanical 4th year, GHRCE), Saurabh Choudhary won the mud race(VIT, Mechanical 4th year) by successfully completing the circuit in the least time. Box cricket was won by ‘Anil Kumar & Team, GHRCE’ & ‘Amrein Sheikh, GHRCE’.

By the evening, the much awaited Rock Band competition started, the guest bands being ‘Black Shift’ and ‘Zenith’. The rock show was preceded by flash mob. The crowd went crazy when the bands started playing. The worthy winners of Rock Band competition were — Diemurgue( band members from different colleges & professions).

The other noteworthy events of the day were clay modeling, paint ball, zorbing, fuse ball and contraption, circuit building and treasure hunt. 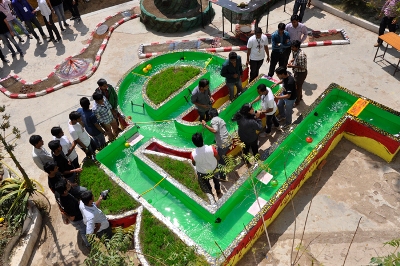