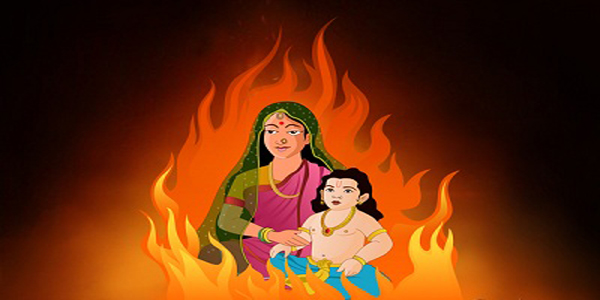 Nagpur News: Holi, the Indian festival of colours is coming closer every passing day. Today is Holika Dahan. It is an evening of bonfires. On this day, a bonfire is lit and then worshiped. Holika Dahan symbolises the win of good over evil.

The Indian festival of colours, Holi has been mentioned in the Vedas and Puranas. Holika Dahan is considered as a victory of Prahlad and defeat of his aunt, Holika. The story behind Holika Dahan is, a demon King named Hiranyakashyap wanted everyone in his kingdom to worship him as God. But, his son Prahlad started following Lord Naarayana. So, King Hiranyakashyap ordered his sister, Holika to kill his son, Prahlad. Though Holika was blessed with a boon that no fire can burn her, the king asked her to sit in fire with Prahlad on her lap. When she sat with Prahlad in burning fire, the opposite happened. Holika got burned to death and Prahlad came out unhurt. That is why, Holi is famous to celebrate victory of virtue over evil.

Leaving the home of Bhadra and worshipping Holi in Nisha Mukh is considered fruitful. As per the astrology also, celebrating festivals in their auspicious Muhurta, turns out to be good and prosperous. In Hinduism, there are various beliefs, custom and traditions. Although, as the time changed, idea and conceptions of people also changed. Their way of thinking and understanding also changed. But still, the culture has not changed.

Today’s generation raises a number of doubts regrading old rituals. But in India’s religious atmosphere, rarely there might be any festival of a year which people don’t celebrate magnificently according to their customs.

Things to Cast into the Holi fire

The things to be cast in Holika include raw mango, coconut or Saptdhanay, toys made of sugar, some part of new crops. Wheat, Urad, Moong, gram, barley, rice and lentils are called the Sapthdhanay.

Before Holika Dahan, Holi Pujan is being done. While doing this Puja, the person should sit near Holika facing in the east or north direction. The following materials should be used in Puja:

Mantra to be Chanted for Prosperity at the Time of Applying Ash to the body,

The mantra should be recited for three or five(odd number) rounds of rosary.

Also, Holika Dahan is not done in Chaturdashi Tithi, Pratipda. In addition to this, Holika Dahan should not be done before sunset. While doing Holika Dahan, it’s considered good to perform the task in the auspicious time declared for it.

Holika Dahan in the Modern Times

In today’s era, considering the importance of trees, instead of wood the mutual incivility is being tried to be burnt. So that, we all can come together and work for the nation’s development and upliftment. Today it is believed that instead of burning tree, they should be brought up in their natural form. In this way, the earth facing air pollution and lack of trees can be saved. Human race can be saved only by saving nature. We should never forget this fact.

Wish you all a Happy Holi….