Nagpur News: The Central Railway boys carved out a blistering victory against Cosmos Club with a margin of 9-0 in the Anil Fulsunge Memorial 6-A Side Hockey Tournament. The Tournament is being organized by Vidarbha Hockey Association at its flood-lit ground on Amaravati Road.

The Central Railway players Eijaz Quereshi and Kashif Quereshi displaying a overwhelming hockey scored 4 goals each including hat-tricks by both. The brilliant show by both Quereshis could be gauged from the fact that the Central Railway team was well ahead in the first half itself with 8-0 goals.

In another match, SECR defeated Athlete Club by a narrow margin of 3-2 goals in an exciting game of hockey.

The opening goal for Central Railway was scored by Eijaz Quereshi in the 3rd minute of the match. Not satisfied with a goal the explosive boy struck three more goals regularly thus scoring a hat-trick. He scored goals in the 4th, 5th, and 7th minute with magnificent skills. Inspired by the brilliant goals by Eijaz, Kashif, too, displayed a awesome game and bewildered Cosmos Club by hitting 4 goals including a hat-trick. The Cosmos boys were left as fans of Central Railway team as they could score a single goal. 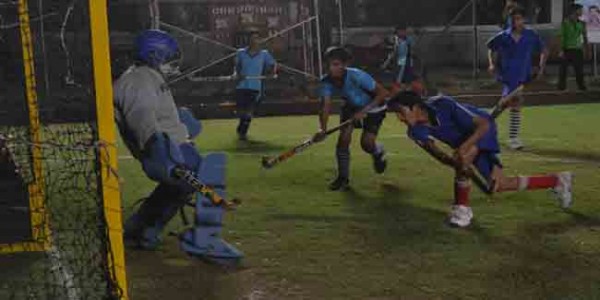