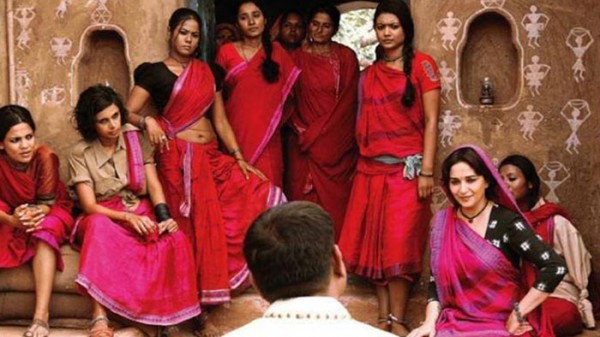 Bollywood dhak dhak diva Madhuri Dixit’s calculated comeback is garnering much appreciation, especially for the movies she picked up to act in. Her latest release Dedh Ishkiyaa is out and fetching much critical acclamation, notwithstanding the box office result which is yet to surface. However, the real thunder from her is about to come. Yes!!! the trailer of Madhuri’s upcoming Gulaab Gang is out and made a mind blowing impact on viewers’ mind through her power packed performance and witty one liners delivered with equal ease. The film also features Juhi Chawla returning to the screens after a hiatus. Both the lead protagonists in Gulaab Gang appear a perfect delight to watch out for.

We had seen Madhuri portraying strong women characters in her films, but Juhi’s role in the film, directed by Soumik Sen, will make you wonder if she is the same bubbly happy-go-lucky girl you have seen on-screen earlier.

Both Madhuri and Juhi are seen in intense avatars in the trailer and are seen mouthing some bold dialogues in rustic lingo.

The film promises thorough entertainment for both these actresses share screen space in a manner one would have never imagined. ‘Gulaab Gang’ is an out and out woman oriented film and women folks can look forward to action aplenty. ‘Gulaab Gang’ is scheduled to release on March 7, a day before International Women’s Day.