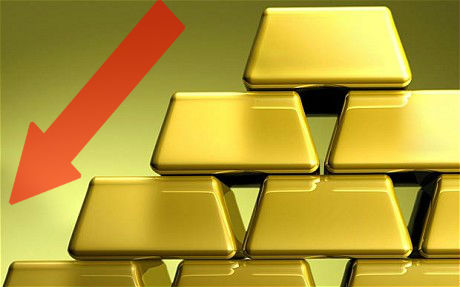 Nagpur News : Gold prices extended their early decline in evening session of trade and quoted down Rs 179 at Rs 26,267 per ten grams in futures trade Tuesday as market players indulged in reducing exposures, largely in tandem with a global trend as firming dollar reduced appeal for safe haven investment.

Gold prices in overseas markets, which normally set price trend on the domestic front, fell today as Asian stock markets and the dollar firmed after a turbulent week, undermining the metal’s appeal as a safe haven and prompting more selling in bullion-backed exchange traded funds.

However, demand in the physical market continued to hold prices near USD 1,400 an ounce as the recent drops in the spot market lured buyers to invest in bullion.

It rose 2 percent last week – its strongest weekly percentage gain in a month – though the metal is down 17 percent for the year.

Gold prices sank to around USD 1,321 on April 16, the lowest in more than two years, in a sell-off that surprised ardent gold investors and bulls.

In Nagpur market, both the precious metals, gold and silver declined today on stockists selling at existing higher levels, driven by a weak global trend.