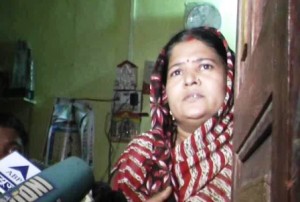 Nagpur News: When media persons rushed for a sound byte to the humble residence of Gajanan Ghadge, one of the two farmers allegedly wronged by BJP MP Nitin gadkari and NCP MP ajit Pawar in the Vidarbha Irrigation scam, they found Ghadge absent and his wife in denial of any conflict between her husband and the powerful  politicians.

“We have received the full amount for our land. Members of our family have been provided jobs in Nitin Gadkari’s factory,” Ghadge’swife Durga told the media gathered at her home in Khursapur village.

Gajanan Ghadge and Satish Bhagat, both farmers from Umrer Taluka in Nagpur district, were said to have been wrongly deprived of their land, in a press conference held by India Against Corruption activist Arvind Kejriwal in New Delhi on Wednesday. Kejriwal alleged that their land, which had been acquired by the State Irrigation Department (during Ajit Pawar’s term as Irrigation Minister) in 2005 for an irrigation project, was instead given to a  Power company and sugar mill promoted by Gadkari, in stark misuse of public land for private profit.