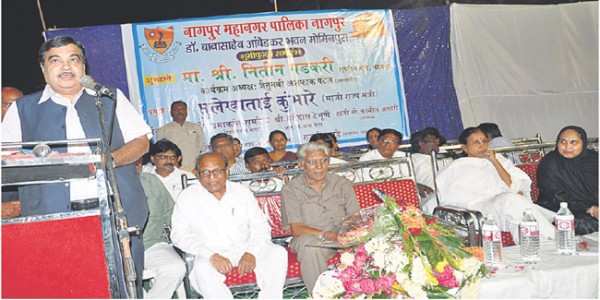 Nagpur News: “Dr Ambedkar Bhavan on Kidwai road in Mominpura is a historical monument. Karmaveer Dadasaheb Gaikwad had inaugurated it in the year 1959 and since then it remained the centre of Ambekarite movement. I got inspiration from the Republican Party of India leader and former deputy chairman of Rajya Sabha Bar Rajabhau Khobragade. I worked as his deputy election chief during his candidature for Nagpur Lok Sabha election. I used to visit this place for meetings,” said former national president of BJP Nitin Gadkari here on Saturday.

Addressing further, Gadkari appreciated the work of corporator Rahul Telang who got the fund of ` 25 lakh sanctioned from weaker section committee of NMC during his tenure as chairman. Gadkari appealed NMC standing committee chairman Avinash Thakre to get images of Dadasaheb Gaikwad, Barr Rajabhau Khobragade, Adv Sakharam Meshram, Adv Dadasaheb Kumbhare and other leaders installed in this Bhavan.

In her speech, Sulekha Kumbhare congratulated NMC office-bearers and officers for making required fund available for construction of Dr Ambedkar Bhavan. She also said that Gadkari pays equal attention towards development of all communities.

Former national president of BJP, Nitin Gadkari addressing the programme as others seated on the dais.