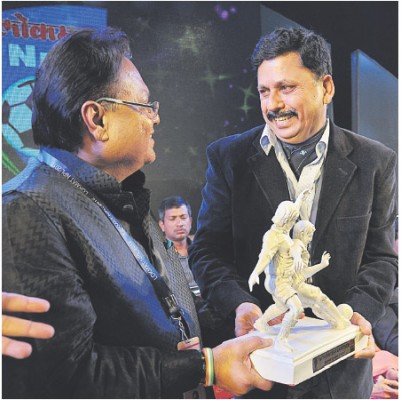 A memento being presented to Air Marshal S Sriram by Chairman of Lokmat Media Pvt. Ltd and Rajya Sabha member Vijay Darda. An image of founder of Lokmat Group late Jawaharlal Darda depicted during the dazzling laser show at the venue that made everybody spellbound
Vidarbha’s biggest football fiesta, Lokmat’s Premeir League got off to a rocking start on Tuesday with a spectacular grand opening that dazzled hundreds of sports lovers throughout the city and beyond and also those who were present at the Yashwant stadium.

The dark night sky lit up with eye-popping fireworks, laser show while the heartening music enthralled the spectators. The entire area was pumped up with sheer passion,energy, enthusiasm and football fervor  The dance performances, light and sound beam show recreated the magic of NPL. The performers of Surkshetra entertained the spectators with soulful and delightful music and songs that were rendered by the team of Surkshetra.

With so much to offer this extravaganza does put rest to all the questions raised as it definitely proves that this tournament is the biggest football tournament to grace this region. Colourful beams of light dancing to the tunes of music delighted the spectators.

The entire stadium reverberated with applaud. The same was the magic of light and sound beam show. The awestruck show kept hundreds of people spell bound. Thereafter around 60 dancing sensations presented a magnificent show that also include the world wide chartbuster ‘Gangan Man’ style dance performance.