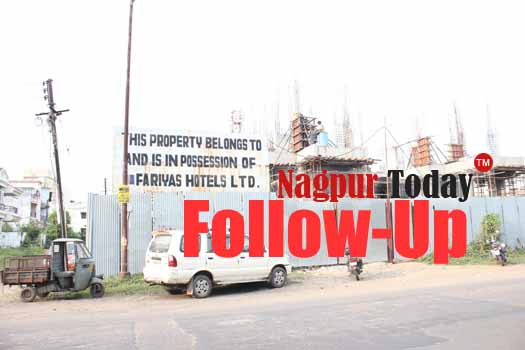 Nagpur News: It was now the turn of Nagpur Municipal Corporation’s Fire Department to show favour to Fariyas.  Despite failing to meet stipulated norms as prescribed in the National Building Code (NBC) and Development Control Regulations (DCR), the Fire Department went ahead to grant a temporary No-Objection Certificate. This was done inspite of their reservations about the title of the property, thus facilitating the NIT to issue building permit to Fariyas Hotel’s residential complex at Khamla.

The Fire Department while granting temporary NOC to Fariyas had pointed out anomalies in their building plan and had asked them to fulfil certain conditions, without which the temporary NOC might be cancelled. However, showing little concern for the rules and guidelines of NBC or the conditions enumerated by NMC, the builder continued to carry on and the construction of the complex is in full swing now.

None of the documents submitted to the Fire Department including the map of the proposed buildings is signed by any of the Directors of Fariyas, though a stamp of Milind Nadiyana and Associates is visible in these documents.  The Department had specifically pointed out that there is no authority letter from the Board of Directors of the company in the name of Milind Nadiyana and Associates neither in the name of any other person for obtaining fire NOC.

The Fire Department in their letter dated 06-10-12, had pointed out that the main entrance of the building is near its emergency exit which is hazardous and therefore must be relocated or rectified. It also stated that there is no provision for refuge area, which should be at a distance of 24 metre around the building. The letter further states that ownership documents have not been submitted with the application. Another irregularity found by the department was that the provisions for emergency exit and fire lift were not according to the DCR appendix P-3 and P-4. The department had also asked to submit a map of revised building plan.

A reply to this letter of Fire Department was received on 09-10-2012 which is undated, un-signed and un-named. It is not clear as to from whom the Chief Fire Officer Rajendra Uchke has received the letter. Instead of complying with the stipulated conditions, the letter states that the building plan has been designed ‘as per practicable’. The provision for refuge area has been made on the terraces of each house, it says, making a mockery of National Building Code (NBC) and Development Control Regulations (DCR) rules. Based on this fictitious letter, an NOC was granted!

If practicability is the basis of constructing a building and its regulation by authorities then what is the need for DCR and NBC or the NOC from Fire Department, asks RTI activist Harish Naidu,. “It appears that extraneous considerations are the basis for granting the temporary NOC,” he says.

Chairman of Fire Committee Kishor Dorler said that if Fariyas Hotels has failed to meet the stipulations prescribed in the norms then his NOC should be immediately cancelled.

Rajendra Uchke, Chief Fire Officer accepted that the controversy is related to ownership or title of the plot but said that it has nothing to do with ‘any contravention of fire provisions’.  He further said that the ownership issue rests with the Nagpur Improvement Trust (NIT) and they should check whether the ownership documents submitted are proper or not.  “We are concerned with whether the proposal is safe from fire and life safety point of view.” He said that Fariyas ‘might have’ complied with the stipulations in Development Control Rules (DCR) and the National Building Code (NBC).

If the ownership issue rests with the NIT, then what was the need for the Chief Fire Officer to issue three letters to Fariyas Hotels and NIT dated 06-10-12, 02-03-13 and 22-04-2013 asking them to clear ownership issue. Does it mean that the Fire Department can grant permission to a person without verifying his ownership title, asks Naidu.

“I will go through the case to ascertain whether the stipulations have been complied with or not’” said Uchke.

Talking to Nagpur Today, Deputy Municipal Commissioner Rizwan Siddique said that he was not in the know of things and that he will call for the records to ascertain facts. “in case anomalies are found, we will take action against the builder,” said Siddique.