Nagpur: Kapil Nagar Police have rounded up three men for allegedly picking a scuffle with on duty cops after their vehicle crashed into a traffic single pole at Tathagat Square here in the wee hours of Monday.

Based on the complaint lodged by Beat Marshal Amit Surjose, Kapil Nagar cops have booked accused identified as Rahul Harish Sudrani (27), his brother Anshul (22), both residents of Kushi nagar, along with Paras Naresh Chuteja (32), a resident of Queta Colony under Sections 353, 294, 323, 504, 506, 34 of the IPC read with Section 3 of Public Property Damage Act. According to police sources, the incident occurred at around 12.30 am when the accused driver Anshul lost control over the vehicle (MH/20/BN/3440) and ended up hitting traffic single pole at Tathagat Square. Following the incident, the squad of Kapila Nagar Police comprising Beat Marshal Amit Surjose and other approached the spot. However, the accused trio, reportedly objected cops’ action and picked up a scuffle with them. The accused also hurled abuses at cops and manhandled them. 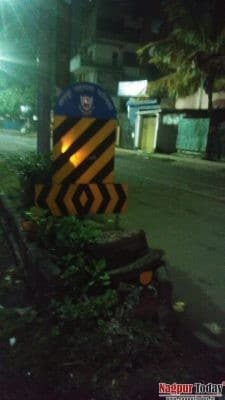 Following their medical inspection at Mayo Hospital, Kapil Nagar Police established that the accused were under influence of liquor. Cops subsequently arrested them and placed under arrest. Further investigation is underway.