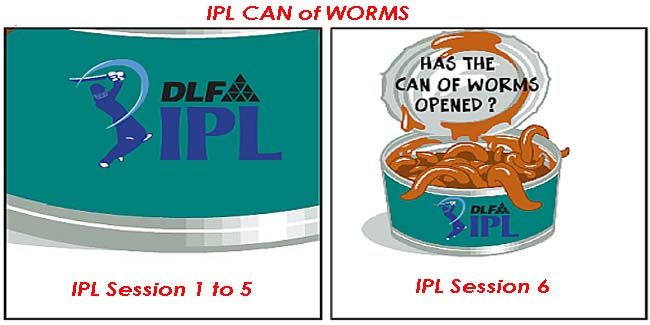 The IPL Spot-Fixing scandal which rocked the cricketing world in general and India in particular is blowing into monstrous proportions with the exposures of appalling aspects every passing hour. Every now and then more worms keep coming out of the can revealing a new dirty tactics involved in the so called gentlemen’s game. Be it through print media, electronic media or through press conferences by the top bosses of cricketing world or police or relatives of the arrested players or bookies.

As far as the ugly scenario in Nagpur is concerned, the IPL spot-fixing scandal is likely to divulge more details of the ugly picture. The three arrested players or bookies either belonged to Nagpur or have connection with Nagpur.

Sunil Bhatia, the key bookie, hails properly from Nagpur while Baburao Yadav, once a remarkable talent employed in the Indian Railways is posted at Nagpur. Manish Guddewar, who has been arrested from Aurangabad, played for the Indian Gymkhana Club in Nagpur.

The nasty aspect of the entire episode of IPL spot-fixing taking round is the involvement of some eminent lawyers or other personalities from Nagpur, who were at one time or the other, associated with cricket Nagpur and outside. It is learnt that these people have been trying their bit to save Sunil Bhatia for the reasons best known to them. The key reason behind the efforts to protect Bhatia may be his powerful “connection” with top guns in politics and his close proximity to other influential personalities or even top cops. It seems to be stronger than apprehended local connections with the spiraling spot-fixing controversy around IPL 6.

Apart from the arrests of two Nagpur-based fixers and a former Ranji player who had represented Vidarbha, it has been learnt that the popular software used by most IPL bookies has been developed by a local company whose site claims the firm to be promoting e-commerce development.

The company, based at Sadar, is learnt to have been engaged for developing the software by a well-known bookie having several businesses in Nagpur including publishing, land dealings by which the various bookies have purchased hundreds of acres of lands in and around Nagpur. There are reports that two bookies have purchased 150 acres of lands on Umred Road. Interestingly the two bookies became billionaires from millionaires at one stroke while the Income Tax authorities could not know the “miracle” and selectively maintained silence. An Income Tax officer candidly accepted that the case of bookies pocketing massive black money falls under police jurisdiction and they can seize the disproportionate cash. The reason put by the Income Tax Officer shows reveals “dirty deal” than the simple answer. The software developing company also offers several security solutions.

Sources stated that the seasoned bookie had flown to Sri Lanka along with one of the software developers around a fortnight ago. It is also learnt that Sri Lanka is the country where the main bookies are now based and operating the business globally. This can be subject to investigation as booking was done through their regular travel agents.

If the Nagpur software company is really found the “culprit” in investigations by various agencies in Nagpur, Mumbai, Delhi and in other states, then the software company could earn the Orange City the dubious distinction of spot-fixing and betting capital.

The previous spot-fixing episodes could also be connected to the Nagpur-based software company for reasons the company created a battery of bookies and the players who indulged a massive way across the nation, possibly, in other parts of the world particularly the Gulf countries. The possible role of underworld as seen in the present IPL 6 scandal vis-à-vis Dawood Ibrahim if considered the true fact then the Orange City could add another dubious distinction being the “residence” of many gangsters having connections of sort with the underworld.

Involvement at top level under scanner

Now, the security and other agencies as well would face a daunting task of unraveling the vicious circle, of course, if they are determined to do so. It will not be surprising or shocking if the top politicians or top bosses in Governments across the nation are found involved in this diabolical spot-fixing episodes since past few years. The possibilities of indirect involvement of top politicians or top bosses in Governments, absolutely could not be ruled out. And the bitter reason – No bookie could carry out the spot-fixing in such gigantic proportions without connivance with them. One need not be an expert or scholar to understand this simple arithmetic.

The only factor between the ground reality and the myth is time. So, Nagpurians be prepared to watch the “Dirty Picture.”