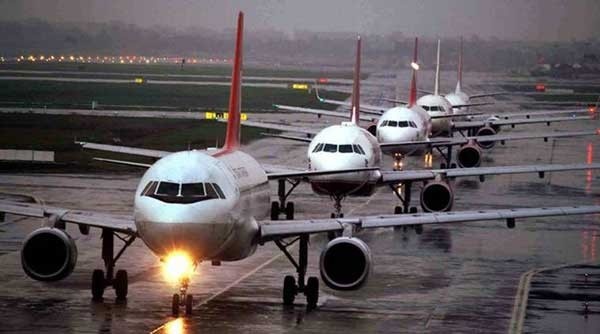 Mumbai is fifth-least punctual airport in the world in terms of on-time performance; Delhi, Bengaluru, Chennai and Hyderabad rank 262, 255 and 246 out of 513 airports and Indigo is the highest ranked airline from India at 14 and Air India was the second-poorest performer.

These are among the findings in a report of 513 airports and 65 airlines across the world by British aviation intelligence firm OAG.

According to the report, Mumbai was ranked 509 in terms of on-time performance after recording only 60 per cent of its over 3.2 lakh flights during June 2017 to May 2018. The OAG report also states that the airport handled a record 1,003 flights during a 24-hour period on June 5.

Globally, Japan’s Nagoya Komaki airport was ranked the best with 94.5 per cent on-time performance during the 12-month period. This is the first time Indian airport and airlines figure in the OAG report. The OAG 2016 only ranked the top 20 airports and airlines in the world. No Indian airport or airline figured in the 2016 report.

Emails sent to officials at DIAL, MIAL, BIAL, HIAL and the airport manager of Chennai did not elicit a response.

Among 65 airlines across the world with more than one lakh operations in the 12-month period, flag-carrier Air India was the second poorest performer. Only 58.4 per cent of its over 1.7 lakh flights were on time and scored marginally better than China’s Shenzhen Airlines with 56.1 per cent on-time performance.

Low-cost carrier IndiGo was the best Indian performer and was ranked 14 with 82 per cent of its 3.6 lakh flights being on time during the period. Budget airline SpiceJet ranked 45 while full-service carrier Jet Airways ranked 54 out of the 65 operators.

The best performing global airline was Panama’s Copa Airlines with an on-time performance of 88.2 per cent, followed by Australia’s Qantas Airways with 85.7 per cent.

OAG said that all airlines and airports mentioned in the report have a minimum of 600 operations a month and the research firm has received flight status information for at least 80 per cent of scheduled flights within the 12-month period.

The airport rankings reflect infrastructure constraints at airports in India. The Chhatrapati Shivaji International Airport in Mumbai reached 94 per cent of its maximum passenger handling capacity in 2017, according to research firm CAPA, which had also said that the airport was expected to reach full capacity in 2018.

Earlier this month, outlining the plan for airport expansion in the country, Minister of Civil Aviation Suresh Prabhu said: “Airlines have expanded their fleet. The number of passengers has increased but commensurate to that if there is no increase in the ground level infrastructure, we will not be able to sustain it. So for sustainable growth, airport expansion is necessary.”

According to Directorate General of Civil Aviation (DGCA) data, the primary reason for flight delays in May was reactionary, meaning late arrival of an incoming aircraft from its previous flight. This was followed by delays on account of air traffic control and airport-related delays.

In India, according to a report by the Parliamentary Standing Committee on Transport, Tourism and Culture, airlines have resorted to non-uniform block times to inflate flight durations between two airports to bolster their on-time performance.

Block time is the duration taken by an aircraft to taxi-out to the runway of its origin airport, actual flying time, and the time taken to taxi to the arrival gate of its destination airport. According to a senior government official, discrepancies pertaining to different airlines setting different block times for same routes existed on a large scale for hundreds of different routes in the country. Following a probe last year, the civil aviation ministry, in November, started rationalising block times and matching them to arrival and departure slots to reduce delays.