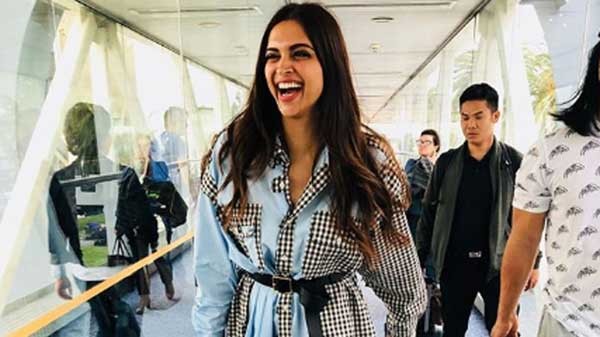 New Delhi: Bollywood’s top actress Deepika Padukone has landed at the French Riviera for Cannes Film Festival. Her ‘touchdown’ moment has been beautifully captured and the actress shared it on Instagram as well.

Deepika has been styled by Shaleena Nathani and looks uber classy! The actress will be walking the Cannes red carpet for the cosmetic brand she endorses. Besides the leggy lass, Cannes regular Aishwarya Rai Bachchan and Sonam Kapoor too will be making their starry presence felt at the French Riviera.

Recently, Dippy made several heads turn at the Met Gala 2018 where she was dressed to kill in a red Prabal Gurung gown. Priyanka Chopra too was seen in an edgy velvet Ralph Lauren outfit.

Meanwhile, ‘Queen’ Kangana Ranaut has already made her first appearance at Cannes where she donned a Sabyasachi black saree with puffed up hair and a glittering choker. The actress nailed the look and made an impressive debut.