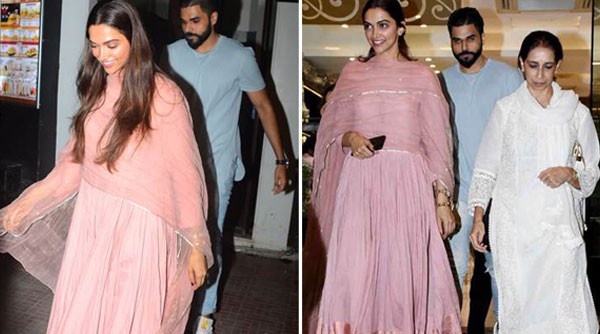 Deepika Padukone, who was last seen in Padmaavat, is currently on a break from work. On Wednesday, Deepika was snapped on a day out with her mom Ujjala Padukone. The actor was spotted exiting a famous jewellery showroom in Mumbai’s Bandra. The two were also seen at a restaurant later.

While it looks like a normal daughter-mother outing, a few reports suggest Deepika was doing her wedding shopping. The latest rumour about Deepika and her longtime beau Ranveer is that their wedding might take place in December this year.

They have been in a steady relationship for over four years, although the two have never confirmed their relationship publically, they haven’t denied it either.Deepika Padukone was seen at the MET gala in New York in May and then flew to France for the Cannes Film Festival.

Deepika Padukone seems to be enjoying her break!