The power-packed blasting leaves residents nearby coalmines under Kanhan areas panicky with houses developing cracks. However, the blasting sound fails to wake up top WCL bosses from their deep slumbers 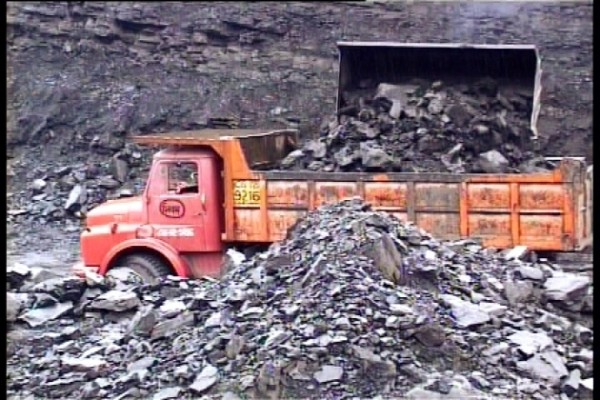 Nagpur News: The residents of several villages and towns living nearby coal mines of Western Coalfields Limited (WCL) have now-a-days been feeling or sensing war-like situations following continuous blasting in the coalmines that leaves the residents panic-stricken. The tremors caused by the blasting add more woes of the residents.

The powerful blasting triggers tremors and big or small pieces of coal are flung far away distances resulting in many nearby road users being injured, sometimes, seriously. The tremors and deafening sound the blasting triggers could be felt by the residents, who fear the jolts could create cracks in their residences making them dangerous to live. The Kanhan residents develop cold feet when they anticipate of any major tragedy in future.

However, the deafening sound of blasting in the coalmines, has not woken up the WCL authorities, the miners and others from their deep slumber. On the other hand, the blasting damages the environment balance, noise pollution and air pollution as well. The minute particles of coal and dusts get mixed up in the air thus polluting the atmosphere in a deadly proportion which in turn grips the residents who become victims of various pollution-related diseases the major being lung disorders. However, according to scientific studies, the noise pollution is found deadlier than the air pollution.

High noise levels can contribute to cardiovascular effects in humans, a rise in blood pressure, and an increase in stress and vasoconstriction, and an increased incidence of coronary artery disease. In animals, noise can increase the risk of death by altering predator or prey detection and avoidance, interfere with reproduction and navigation, and contribute to permanent hearing loss. Noise pollution affects both health and behaviour. Unwanted sound (noise) can damage psychological health. Noise pollution can cause annoyance and aggression, hypertension, high stress levels, hearing loss, sleep disturbances, and other harmful effects.

The power-packed blasting in coalmines in Kanhan areas have left the residents dreaded and panicky as many houses develop cracks in smaller or big proportions that may lead to collapse of some houses as they are not built with  conventional material and are a “Kaccha” type (Using wood,  a mix of mud, sand and leaves of trees) of houses making the vulnerable to jolts or tremors even in small scale. And many houses have collapsed, too, in the Kumbharkhani area where houses have been made purely using mud and tree leaves.

Similarly, the WCL mines have spread the excavated coal in big heaps along the roads nearby the mines. Sometimes, big pieces of coal roll over the roads causing fatal mishaps as the vehicle drivers could not spot the pieces of coal, The coal dust is also gets spread on the roads making the roads slippery and dangerous for users. Moreover, the WCL has not put up boards in the vicinity of 5-6 kilometres from the coalmines mentioning the timings of blasting that could inform the road users about the blasting times. In this small but important issue, it appears, the WCL authorities are not seen serious.

The need of the hour is to stick to the timings of blasting according to rules and regulations. The blasting, too, could be carried out with less intensity so that not only noise pollution would be curbed but the houses nearby the coalmines would be safe. Otherwise, it is certain, the residents nearby coalmines under Kanhan areas, would be punished for no fault of theirs, and even forced to move to other safe places which is absolutely not possible looking to the present high-priced lands and cost of construction of houses.

The only solution to all these problems lies with WCL authorities. They don’t need to wage war. They just need to wake up from deep slumber not by the deafening sound of blasting but carrying out their responsibilities with a sense.