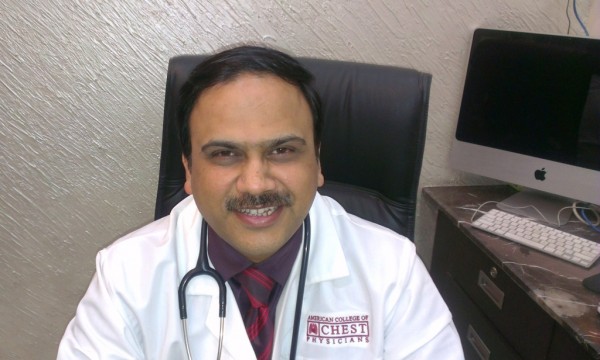 Nagpur Today spoke with Pulmonologist Dr. Rajesh Swarnakar, about common prejudices, preventions and the rising cases of lung problems in recent times. Following are excerpts from the interaction.

Meghna: What made you take up medicine as a career and choose this specialty?

Rajesh Swarnakar: My maternal uncle was a doctor in Sewagram, having graduated in the first batch of Kasturba Gandhi Medical College. When we used to go to Sewagram, we would visit his hospital. We used to see villagers coming from far- flung places in bullock carts to this hospital, which was the only big building in the village. They would come for treatment, make their own food for the day and take the bullock carts back in the evening. That vision made an impact on me, and there was no looking back. I have never considered any other career.

I was lucky enough to have done a traineeship at AIIMS, where we saw critical patients with problems that you wouldn’t see in a regular Hospital. It got me interested in Pulmonology. When I settled down for private practice in Nagpur, there were only two or three Pulmonologists in the city.

Meghna: What work have you done, and what problems have you seen, before settling for private practice?

Rajesh Swarnakar: I have been a doctor with Western Coalfields limited, and was posted at one of their mines for Periodic Medical Examinations. The company would hold these regularly because of the nature of the work in mines. The habit of smoking beedis in close ventilation compounded the problems already faced by the miners because of coal dust. If it was noticed that a worker’s health is getting affected, they would be transferred somewhere else. Patients diagnosed with the coal dust disease, i.e.  Pneumoconiosis, would be compensated, given retirement and their job would be given to their next of kin so that they don’t suffer further harm to health. Occupational diseases are very common in our country, but not many people are aware of them.

Meghna: With many steps being taken to raise awareness and dissuade people from smoking, have you seen a reduction in the number of tobacco- related lung problems in the city?

Rajesh Swarnakar: India is the only country where consumption of tobacco is still increasing. If you use your body and your lungs for functions it is not meant to perform, such as inhaling Carbon Monoxide by smoking, it will get even with you at some point. COPD, or Chronic Obstructive Pulmonary Disease basically makes it difficult for you to breathe and is incurable. It has to be kept in control all your life through medication, just like Hypertension or Diabetes. About 30% to 40% of my patients have tobacco related diseases like COPD, or, in extreme cases, Lung Cancer.

What is disturbing is that I see more and more young people being affected. I now see thirty five and forty year olds being diagnosed with lung cancer because of their smoking habit.

India is a rare country where we have cases of non- tobacco- related COPD. Consumption of biogas in villages and other fumes in closed spaces is a big reason. The number of COPD patients in India outnumbers the number of Diabetes and AIDS patients combined.

Meghna: What are the common misconceptions and mindset problems that make prevention of these diseases difficult?

Rajesh Swarnakar: Quitting smoking is the easiest thing to do, but maintaining that status throughout your life is very difficult. I make it a point to ask the patients’ spouse and kids to my cabin as well, when I have to tell someone to quit smoking. The family can influence the patient to quit. A two- minute interaction between doctor and patient also helps, to make them understand why it’s important to quit. Simply writing out a prescription won’t influence an addict- the preventive aspects have to be explained.

The myth about lung cancer is that it only happens to the elderly- the age group of people being diagnosed is actually reducing. People need to come early and get themselves checked. If you cough refuses to go away for two- three months, you should consult a doctor, instead of assuming that it’s because of smoking or some other reason.