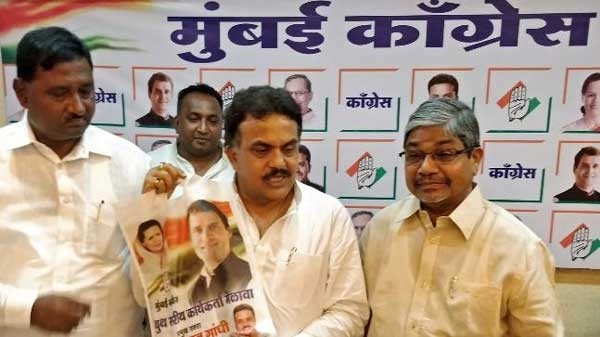 Mumbai: Congress has been making all round efforts to corner ruling BJP in Maharashtra in the upcoming state assembly elections. Fine tuning the voice for Congress in Maharashtra, Mumbai Congress president Sanjay Nirupam on Monday released a booklet, allegedly exposing the deep-rooted corruption in the BJP.
This booklet enlists a significant number of BJP leaders with serious corruption charges against the BJP leaders including Maharashtra CM Devendra Fadnavis.

“Corruption is the mutual belief shared by the BJP leaders which exists at every level in the party. It is extremely disheartening to watch that the innocent people who voted for the BJP in the past are now paying its price. We intend to create awareness among the people about such corrupt leaders so that they can take an informed decision in the future,” said Nirupam in a press conference.

The booklet reiterates the failures of the Modi government focusing on factors like lowest agricultural growth (1.9 per cent) under the BJP government as compared to a growth of 4.2 per cent during the Congress rule, failure in waiving off the farm loans, continued bank scams and the government’s decision to stay quiet on such repeated issues, soaring fuel prices, failures in controlling Naxal attacks and increasing violence against the members belonging to the scheduled castes.

“The Prime Minister has spent almost Rs 4,300 crore on publicity alone. Clearly, this amount of money has been used to hide all the wrong doings of the BJP government. The figures show that the ruling government is the only one living the ‘Achhe Din’ promised by them and the people are paying for it since the Maharashtra Chief Minister is refraining from taking any action against the corrupt,” said Nirupam

Calling the BJP government a “curse to the common man”, Nirupam urged the people to see how the BJP leaders, along with the businessmen of the country are filling their coffers while farmers and the common man continues to struggle to make ends meet.
Along with this booklet, two other booklets about corruption at the central level and at the Brihanmumbai Municipal Corporation (BMC) level were also released.

The BMC claims to have spent Rs 2,605 crore on waste management, Rs 3,311 crore on health facilities, Rs 2,311 crore on education, Rs 5,061 crore on water supply and Rs 3,286 crore on road and skywalk constructions.
Nirupam questioned the actual amount spent on development in Mumbai as the mumbaikars continue to suffer.

Congress chief Rahul Gandhi will be visiting Mumbai on Tuesday. He will go to Bhiwandi court to attend the court hearing, then will address Congress corporators at the Mumbai Cricket Association club in Bandra Kurla Complex.
On June 13, Rahul Gandhi will leave for Chandrapur to meet the family of Dadaji Ramji Khobragade who died last week. Khobragade invented almost nine different varieties of rice.