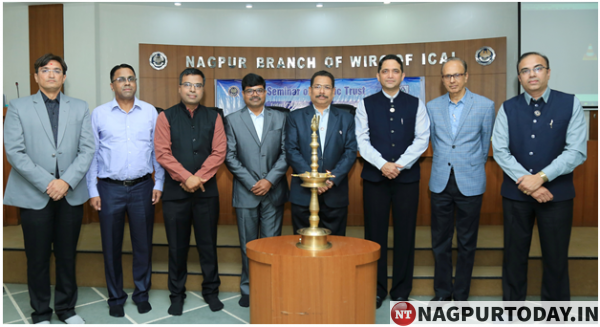 Public Trust means an entity express or implied for either a public, religious or charitable purpose or both, and includes a temple, or any other religious or charitable endowment and a society formed either for a religious or charitable purpose or for both and registered under the Societies Registration Act, 1860. There is no Central Act to govern public trusts, but various states have enacted their own separate acts according to their conditions and administration. In effect, the funds belonging to the trust needs to be expended on the objects of the trust. This can be ensured, if required transparency is taken care of in the day to day operations of trusts, remarked Dr. Kishor Dhule, Hon. Addl. Commissioner of Income Tax [Exemptions].

Dr. Kishor Dhule, Chief Guest on the occasion, was gracing the Seminar on Public Trusts, organized by Nagpur Branch of the Institute of Chartered Accountants of India. He stated that a public trust is a vehicle which is set up for the specific benevolent purpose or objects, for the benefit and need of the beneficiaries who may not be specifically defined in the trust deed, but include a wide genus of people who fall within the parameters of the object and purpose of that trust. There are more regulations, checks and balances for the functioning, governing and maintenance of such public trusts, as it is meant for the benefit of people. He added to his words of wisdom that the management of such trust should not be left unchecked, so that the purpose for which the trust is set up is not been vitiated or destroyed. He conveyed in crystal clear terms that Chartered Accountants are not only partners in Nation Building, but also are recognized as Partners in Knowledge Sharing.

He congratulated the Nagpur Branch for taking due efforts in spreading words of knowledge and lending required knowledge updation in the matter of subjects concerned. He remarked that in view of recent policy decisions to check genuineness of charitable organisations role of Chartered Accountants has increased manifold. This being a great opportunity to deal with in professional lives, the juncture is apt one to have such knowledge rich seminar, he conveyed while concluding his words of deliberation.

CA Abhijit Kelkar, Regional Council Member expressed that a program on Public Trust was the need of the hour. Chartered Accountants are given a big responsibility for ensuring correctness of records and accounts of Trusts. The provisions governing Public Trust including FCRA now gains more prominence particularly with specific deadlines for following the set rules, he remarked. He congratulated the Nagpur Branch under the leadership of CA Suren Duragkar, for taking great efforts to serve the fraternity.

CA. Suren Duragkar, Chairman of the Branch, remarked that the responsibilities and expectations form practicing professionals have increased manifold. The statutory requirements which were earlier recommendations have now become compulsory with set due dates and increased penal consequences. Public Trusts being formed largely for Charitable purposes, checking of utilization of funds has now become more pertinent in audit of accounts. To address the concerns and to equip the members of latest amendments this seminar on public trusts has been organized, he said. CA Suren Duragkar welcomed the Hon’ble Chief Guest, Learned Speakers and all the delegates present for the session. CA Duragkar raised the concern for having a Bench of Commissioner (Exemptions) at Nagpur itself for speeding the works related to Trusts for which the assesses of Vidarbha are required to visit Pune Office.

CA Gautam Shah, Mumbai, effectively played his role by sharing his knowledge in the field of provisions governing the formation and management of trusts. He discussed various practical cases from his knowledge base and guided the members very effectively.

CA. C. N. Vaze, Mumbai, guided the audience present with respect to the provisions and practical situations governing the crucial area of accounting, audit and legal compliances. He also guided the members with respect to ethical standards and code of conduct, supposed to be taken care of by the professionals.

CA Mahavir Atal, from Nagpur, having rich experience in the field, shared his knowledge with respect to the provisions governing taxation of trusts. He conveyed that the professional opportunity in the matter of serving clients dealing with trusts and societies, needs to be duly recognized. Ensuring transparency and achieving the holistic object of taking care of noble causes of institutions can be effectively ensured through much needed audit and reporting services of Chartered Accountants, he remarked.

CA. Anil Dani, Past Vice Chairman WIRC and Past Chairman, Nagpur Branch, speaker on the occasion, deliberated with respect to Ethical Standards vis-à-vis audit function of Chartered Accountants. He shared his rich treasure of knowledge and lent words of guidance to the large number of delegates, with respect to the topic.

CA Sudhir Baheti, guided the participants with respect to the provisions governing exemptions for public trusts. Do’s and don’ts to deal with the said provisions, were discussed in detail on the occasion. CA Bosco Dsouza, played his role effectively by guiding the members present with regard to the FCRA Provisions governing the trusts. Various practical cases were discussed by him and the queries were resolved to the satisfaction of the members present.

CA. Kirit N. Kalyani, Vice Chairman of the Branch, very effectively coordinated the inaugural of the event. Technical Sessions were coordinated by CA Jiten Saglani, Treasurer and CA Sanjay Agrawal, WICASA Chairman. Vote of thanks was duly proposed by CA Saket Bagdia, Secretary of the Branch.