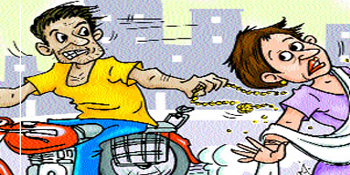 Nagpur News: With the marriage season on full zeal, the chain snatchers seemed to have targeting marriage guests to make away with mangalsturas and other gold valuables wore by them. On Tuesday night, within a time span of fifteen minutes, two women who were heading home from separate weddings were robbed of their gold ornaments at different places.

Indubai Mankar (42), a resident of Dattatreya Nagar in Sakkardara, and her husband were heading home on a bike from a wedding reception at Hasanbagh square when two bike-borne robbers snatched her gold mangalsutra worth Rs 1.5 lakh and speed away.

Mankar even tried to follow the chain snatchers but failed to chase them.

66-year-old Vimla Katulwar, was too crossing road after stepping out from a wedding at Bajaj Nagar when the robbers approached her near the divider and made away with gold chain worth Rs 80,000.

On December 3, two women heading to attend the same marriage at Bajaj Nagar were robbed near the venue.