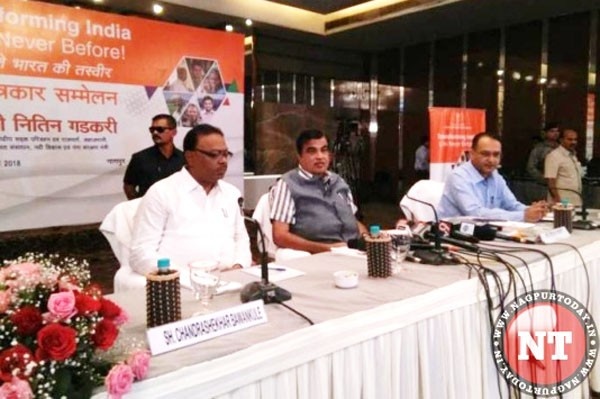 Nagpur: Union Minister for Road Transport and Highways, Water Resources and Ganga Rejuvenation Nitin Gadkari on Saturday declared that India has become growth engine and progressing by leaps and bounds.

Gadkari was addressing a press conference in the city to highlight achievements of four-years of Narendra Modi Government.

“Several welfare schemes for farmers were launched but still some problems persist. Even thought produce has increased manifold, proper rate is not being received. This anomaly affects international markets as well. The Opposition parties only see hike in fuel prices but conveniently turn blind eye towards stabilisation of prices of onion, edible oil, sugar and other essential items,” Gadkari said while taking a dig at the Opposition parties.

The Union Minister said a number of development projects are being implemented in Nagpur city and district as well as across Maharashtra.

The Union Minister Nitin Gadkari listed a host of achievements by his ministry.