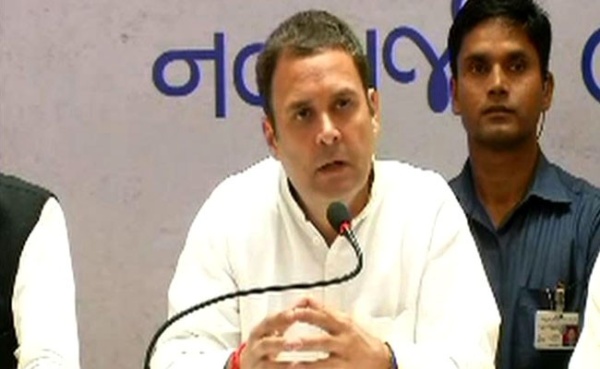 New Delhi: Latching on to a media report claiming that an FIR was filed against Rashtriya Janata Dal chief Lalu Prasad despite Central Bureau of Investigation’s legal wing saying there was no proof, the Congress accused the Bharatiya Janata Party of engaging in political vendetta against its opponents to hide its ‘epic failures’.

The Congress also warned that the BJP should ‘count its days’ as it will be in power at the Centre only for a few months and should ‘be ready to face people’s wrath’.

Leading the Congress’ charge, party president Rahul Gandhi accused the ruling BJP of ‘using’ the CBI to ‘harass’ key opposition politicians and asked who will be Prime Minister Narendra Modi’s ‘next target’.

Dubbing the CBI as the ‘Captive Bureau of Investigation’ in the hands of the Modi government, the Congress said political opponents should not be ‘hounded’ by misusing state machinery.

It accused the Modi government of ‘leaving no stone unturned’ to file a series of cases against its political opponents, and said the direct consequence of these actions is that the credibility of institutions built with decades of hard work gets denigrated.

‘The BJP Govt uses the CBI to target key opposition politicians to intimidate and harass them.

‘Now, a news report reveals how the CBI was pressured to file a case against @laluprasadrjd, ignoring the advice of its own legal team. Who will Modi ji target next?#VendettaPolitics,’ Rahul said on Twitter.

Congress’ chief spokesperson Randeep Singh Surjewala, in a statement, alleged that the BJP has ‘absolutely no contribution’ in establishing institutions like the CBI.

He said the ruling party will ‘never realise’ the price that the nation has to pay for its ‘politically motivated, sinister and ill-driven actions’.

“The faith of the people in these institutions is fast eroding and the BJP is to be squarely blamed for it,” Surjewala said.

Accusing the BJP of engaging in malicious propaganda through false cases against its political opponents, the Congress said eventually all such attempts ‘fall flat’.

The Congress also named some of its key leaders including P Chidambaram, Ashok Gehlot, former Himachal Pradesh chief minister Virbhadra Singh, and also Patidar leader Hardik Patel as the ones against whom the BJP ‘unleashed state machinery’.

“The Modi government is trying to hide its epic failures by unleashing vendetta politics’ The Congress unequivocally condemns any act of political vendetta, indulged by the Modi government. Now that the BJP has only few months left in power, it should count its days and be ready to face the people’s wrath,” Surjewala said.

According to a media report, the CBI’s Economic Offences Division had in June 2017 pressed for an FIR against Lalu Prasad saying that as Railway Minister in 2006, he allegedly facilitated the transfer of two railway hotels to a private firm in exchange for prime land in Patna.

But the probe agency’s legal wing opposed it, saying there was no evidence to show that Prasad influenced officials or that the land transfer was a quid pro quo, the new report claims.