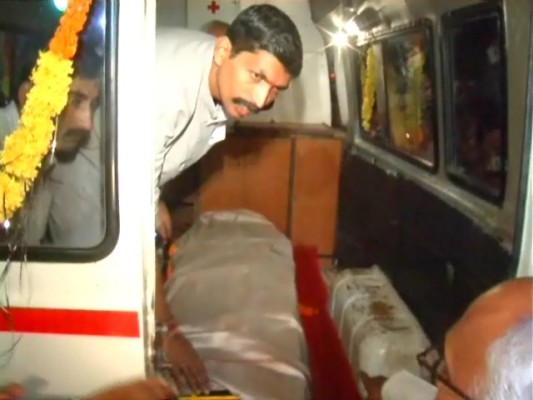 The body of former RSS Chief Sudarshan was brought to Nagpur at 6 pm this evening via a private chartered Plane. The body was received by a huge crowd that included RSS leaders and various BJP leaders. The body was brought in a coffin and is taken to the RSS Headquarters at Reshimbagh. tomorrow till 2pm the body will be kept at the RSS Headquaters.
According to our reports the dignitaries that are expected to visit the RSS Headquaters to pay their last tribute to the Former chief are said to be Senior BJP leader LK. Advani, Sushma Swaraj , Narendra Modi and various former and present chief, and Prime ministers of BJP and various leaders of RSS. The body will be taken to the Crematorium at 4 pm tomorrow where Sudarshan’s younger brother will perform his last rites.
.%%wppa%% %%slide=29%%