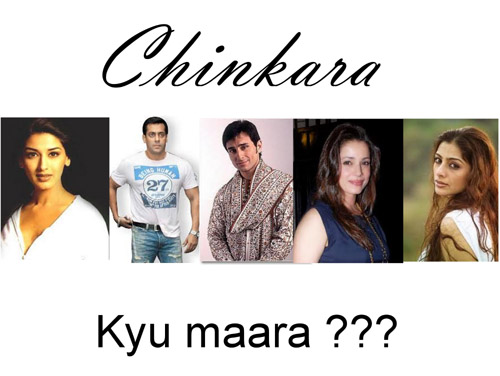 A Jodhpur court today framed revised and diluted charges against Bollywood actors Saif Ali Khan, Tabu, Sonali Bendre and Neelam under Wildlife Protection Act, for aiding film star Salman Khan in a 14-year-old blackbuck poaching case in Rajasthan. The four actors have denied the charges and will file a review petition in the court.

If charges against Saif Ali Khan, Tabu, Sonali Bendre and Neelam are proven right, the actors could face up to six years in jail. Salman Khan was not present in the court, which has now set the next hearing of the case on April 27.

Charges of rioting and Arms Act have been dropped against the four actors. All the actors, including Salman Khan, are accused of killing two blackbucks during the shooting of the film ‘Hum Saath Saath Hain’ in 1998.

If charges against Saif Ali Khan, Tabu, Sonali Bendre and Neelam are proven right, they could face up to six years in jail.

Salman has been convicted for 1 year and 5 years for poaching of two Chinkaras at Bhawad and one Black Buck at Ghoda Farm (Mathania) in the intervening nigh of 26-27 September, 1998 and 28-29 September, 1998 respectively. Appeals against these sentences both by Salman Khan and state government are pending in the High Court.