It is for the first time in the history of RTMNU, 100 percent members skipped the Academic Council meeting over the agenda that mentioned no discussion would be held at all on the crucial issues of blacklisted colleges and the minimum number of regular teachers required in these colleges. 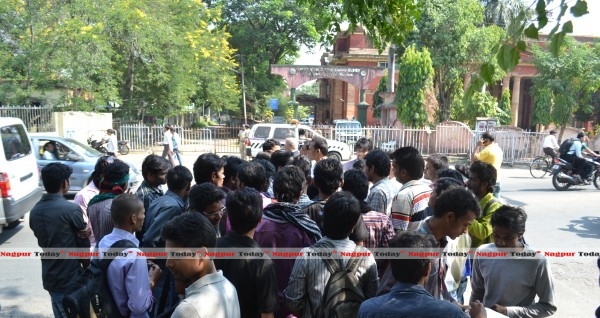 The Rashtrasant Tukdoji Maharaj Nagpur University (RTMNU) has written a dubious chapter in its history when the 100 members out of 100 boycotted Academic Council meeting held on Wednesday (February 5). The 100 percent boycott could certainly be called as one more Black Day in the history of RTMNU in real sense of the word.

According to information, the agenda of the Academic Council meeting triggered the drastic step of boycott on the part of the 100 members. The agenda mentioned no discussion would be held at all on the crucial issues of blacklisted colleges and the minimum number of regular teachers required in these colleges. Such agenda infuriated the members who decided to skip the meeting collectively and unitedly.

The Wednesday morning witnessed the entire university premises under the cover of tight security. There was no entry in the University offices to anyone except the RTMNU officials. Directives were issued banning entry to Directors of the educational institutes in the university premises.  In the last meeting of the Management Council, activists of  NSUI and Directors of blacklisted colleges had created ruckus and disrupted the meeting.

The Vice Chancellor of RTMNU Dr Vilas Sapkal, while reacting on boycott of today’s Academic Council meeting by all the members, said that discussion on blacklisted colleges and Convocation Ceremony was certainly to be held in the meeting. It seems that the Council members are not interested in discussing the issues. Now, the decision on the same will be taken in accordance with the rules and regulations. Action will also be taken against the University members who were absent  in the meeting, added Sapkal.

The Academic Council members, on the contrary, opined that the lackadaisical attitude of the Vice Chancellor on various issues and indecision on his part prompted them to boycott the meeting.