Pahlaj Nihalani is the producer known for his hard-hitting comments and blazing statements that expose the murky business beneath Bollywood. Being in the industry for over three decades Nihalani is one of those yesteryear producers who delivered many matinee hits like Ilzaam, Aag hi Aag, Shola Aur Shabnam and Aankhen at the box-office. He remained the President of Association of Motion Pictures & TV Programs Producers for good 23 years and resigned in 2009 as he was rued over the politics in the association. 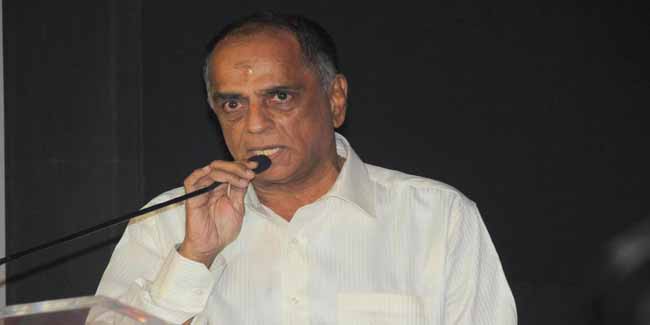 During his visit to Nagpur to attend the wedding ceremony of city’s renowned real estate businessman Prafulla Gadge’s daughter, Nihalani had the free-wheeling chat with Nagpur Today in which he openly expressed his views about the changed scenario in film-making,  talked about his upcoming movie Avtaar and his dissatisfaction towards the factions in the industry.

Nagpur Today : Reigning the tide in Bollywood for so many years as the producer, how do you see the transformation of industry all through these years?

Pahlaj Nihalani : Earlier the producer played the key role in movie making and hold the command of the movie but now actors are dominating the movie. Producers have become like courier service. Earlier everyone from the crew was concerned till the release of the picture. Now everyone is bothered just for finishing their tasks. In the digital era, before signing any movie the actor is eager to know the corporate behind the movie. So the corporates have replaced the producers. Earlier the cinema halls were chosen to release the movie. The theatres were picked up according to the genre of the movies. Now it is released in all the cinema hall and multiplexes. The actors or makers do not own the practical responsibility towards any movie because the corporate had already bought the movie.

Nagpur Today : But how can one knew about which cinema halls to pick for the release of movie belonging to particular genre.

Pahlaj Nihalani : There were clearly designated cinema halls. For example Rajshri Productions looked for specific category of cinema halls. Right from the time of Gurudutt the trend was started and continued till recent past. Family movies were released in specific theatres while the movies for special class were exhibited in the suitable theatres. Now the process of movie viewing has entirely changed. People go to multiplex for shopping and end up watching movie. Or they watch movie and do the shopping alongside. Now the things have changed. Previously, there was healthy chain of producers, distributors and exhibitors. The risk to producer was transferred to distributor who passed it on to the exhibitor. Now the ball is in the court of exhibitors, particularly the multiplex owners who enjoy the liberty to pick the film for release at their discretion.

Nagpur Today : Now a days the films are getting much hype before its release. Don’t you feel the content is lacking in this part?

Pahlaj Nihalani  : Now the film business is just practiced like fashion. Movies are finding appeal in particular regions. While a movie does well in one region, it fails to garner enough audience in the other region. Films are smartly tagged as super hit, even if there appears not more than 50-60 audience in a cinema hall. Housefull is the concept that has completely gone out of fashion. Even a Yash Chopra movie is not able to pull the desired crowd. Now the film actors look for suitable days to release their movie. “Aaj kalakaaron ko baisakhi ki zaroorat hoti hai. (Actors need crutches to ensure their movies get considerable audience). Eid, Diwali and Christmas along with extended weekends have become more important than any other days of the calendar. If the actors really have substance and the movie has convincing content then there is no need for any such occasion for releasing the movies.

Nagpur Today : Recently trend of 100 crore and 200 crore club has caught up the industry. What are your views?

Pahlaj Nihalani : Now the audience are intelligent enough to understand the equation behind these inflated figures. The collection is shown in gross which includes many things. Out of 250-300 films released every year, 85% films are flop. This is certainly indicating towards bigger loss.

Nagpur Today : Do you have any plans to produce next movie?

Pahlaj Nihalani : Yes. I am producing and directing a film titled Avtaar starring Govinda, Sunny Deol and a new girl Raika. 50 % shooting has been completed and we are expecting to release it sometime in April next year.

Pahlaj Nihalani : It is movie about drugs and mafia. It focuses on how college students are caught in drugs net. It is based on youngsters.

Nagpur Today : There were talks of you making a launch movie for Govinda’s daughter Narmada?

Pahlaj Nihalani : Ya it’s true. I am looking for a subject to have Narmada in my movie.

Nagpur Today : Which of the latest movies you appreciate?

Pahlaj Nihalani : I liked the music and story of Yeh Jawaani Hai Deewani. The songs were perfectly placed according to the situation. After a long time I have heard the real Hindustani music. I believe that music is the progress of moments in any movie. Music is the hero of the film but ironically music directors are not getting their proper due.

Nagpur Today : At present the movie reviews do not match the actual performance of the movie.

Pahlaj Nihalani : Now everything is based on media network. The ratings are decided even before the release of the movie. Every journalist is handed out the ‘packet’. The bigger the amount, more the stars. Actual audiences are truly missing. They are inclined more towards television. Stars are openly accessible to public. They wander from shows to shows on television to promote their movies. The product is endorsed alongside the promotion of the movie. This barter system has hampered the value of the star.

Nagpur Today : A breed of parallel cinema has been developed now a days with audience developing likes for the movies like Paan Singh Tomar, Gangs of Wasseypur, Ishkiya. How convinced you are with this genre of movies?

Pahlaj Nihalani : These directors have their limitations. They are just running in the limited race of 1000 to 1600 meters but cannot go beyond that. So far Paan Singh Tomar is concerned, I like the content of the movie but talking about other movies, foul language is being freely used in the name of cinematic liberty. If you remove gaalis from these movies you will find nothing exciting about such movies. Lately I have gone to watch Grand Masti in the theatre but I could not stand it till the end. I think such movies are simply frustration of film-makers. Old people might have enjoyed the movie, seeing the display of sex but not the youngsters.

Nagpur Today : When was the last time you encountered the best story in any movie?

Pahlaj Nihalani : Kahaani was good in plot. 3 idiots has wonderful story. Even I liked the presentation of Singham.

Nihalani produced his first film Haathkadi in 1982, starring Sanjeev Kumar, Shatrughan Sinha and Reena Roy. The movie did quite well. But Nihalani took a break before producing his next film.

Though Pahlaj Nihalani’s latest venture, Khushboo which featured debutantes Avantika and Rishi Rehan did not fetch well at the box office, the music by Adnan Sami was appreciated. Nihalani recently made a special appearance in the film Halla Bol (2008).