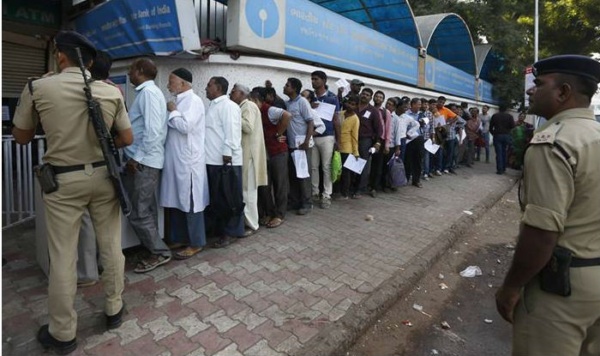 Hyderabad: Telangana and Andhra Pradesh are facing severe cash crunch situation, as ATMs across the two cities are devoid of cash. According to reports, currency is available only 60 per cent of the time in most of the ATMs, and few ATMs of few banks have stopped functioning for the past three months.

To resolve the problem, the two states have forced banks to transfer cash from neighbouring states. To replenish their ATMs, Telangana has been able to arrang cash from Maharashtra and Kerala, while Andhra Pradesh has got help from Odisha and Tamil Nadu.

Swaminathan J, State Bank of India’s Hyderabad circle chief general manager, told a leading newspaper, “With the approval of RBI we moved cash from Maharashtra and Thiruvananthapuram in Kerala to Hyderabad to tackle the situation of accelerated withdrawals from ATMs and bank branches in January and February, but did not do so in March. We usually try to ensure that cash is available in ATMs at least 94 per cent of the time. Post demonetisation, following the cash crunch, we had taken several measures to ensure that ATMs had cash available for at least 85 per cent of the time but in January 2018, this came down to 70 per cent and is now hovering around 60 per cent,”.

Senior Citizens under pension schemes, such as Aasara and National Rural Employment Guarantee Act, have also been hit by the crisis, as they are unable to withdraw any cash from post offices or banks.

“We have most of the government salary accounts with us. Post offices and treasuries also have to be supplied cash for the Aasara social security pension. Every month, Rs 290 crore has to be given to post offices for Aasara. There are instances of people visiting post offices multiple times for their pensions and NREGA wages,” he pointed out.

With Reserve Bank of India (RBI) stopped supplying the highest denomination note, it has been reported that since September 2017 there has been a severe shortage of Rs 2000 note.

“There are no deposits of Rs 2,000 notes by customers, and we have the least reserves of Rs 2,000 currency notes,” Swaminathan said, adding that RBI is primarily supplying Rs 200 and Rs 500 denomination notes.