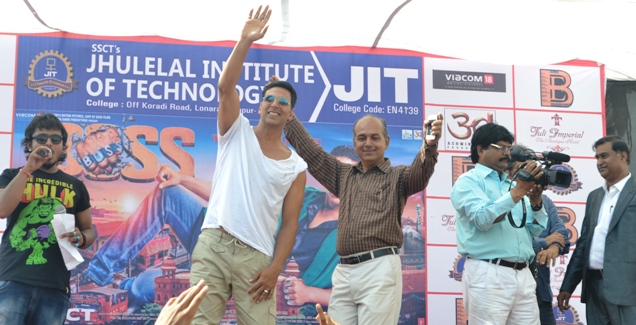 INOX at Poonam Mall hosted Indian Film Actor Akshay Kumar, Aditi Rao Hydari and Shiv Pandit who were in the city to promote the much-awaited Hindi movie ‘BOSS’. The cast of BOSS addressed a press meet.

Akshay who spoke about his upcoming movie “BOSS” slated to hit the theatres on October 16, 2013, said that he enjoyed doing this remake of the Malayalam movie named “Pokiri Raja”. The reason also was that he could identify himself with the hero who respects his father. He added that he too loves his parents and that is one reason why he named his movie production house after his father’s name.  He added that all the stunts were done by him and are all original. Shiv Pandit while replying to a query said that the transition from small screen to big screen was indeed a special experience. He thanked Akshay for giving him an opportunity in his production house. He also added that he has three more movies signed with Akshay. 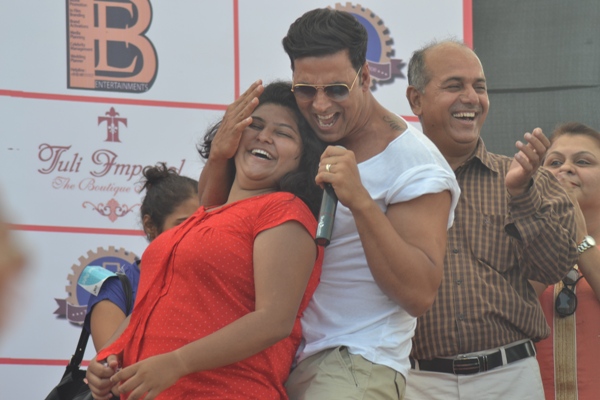 To another query, Akshay said that he loves to act in Marathi movies. He is just looking for a good script and he would definitely act in it.

Speaking on the visit, Unit Manager, INOX Poonam Mall Amar Rizvi said that they are  very excited to host the lead cast of BOSS here at INOX Poonam Mall. Events like these mark INOX’s efforts to make the movie-viewing experience more interesting and varied. He added that they look forward to many more such events for their valued guests,” he added. Earlier Akshay Kumar also visited Jhulelal Institute of Technology for promotion of his upcoming film BOSS. His co-stars Aditi Rao Hyadari, Shiv Pandit and producer Ashwin Verde accompanied him. Akshay Kumar also interacted with management and  lauded the infrastructure of college. Akshay Kumar had a very lively interaction with the students and inspired them to work hard to be  successful professionals for bright future of country. He told them that they are the future of the country and they must respect their parents, elders & take their care inspite of whatever successl they achieve in life. He then charged the gathering with his wittiness, motivated the students, sang songs & danced with them to some of the popular tunes of the movie BOSS.  Akshay Kumar & Shiv also invited students to join them on the stage & performed with them. Students were very happy and proud. Some students were given CDs of the songs of the movie. Students have enjoyed the event thoroughly. Those present on the occasion were Chairman JIT Mahesh Sadhwani, Secretary JIT Virendra Kukreja, Treasurer JIT Jay Sahajramani, Director Technical Pramod Pampatwar, Dean JIT Madhavi Wairagade and other management members.