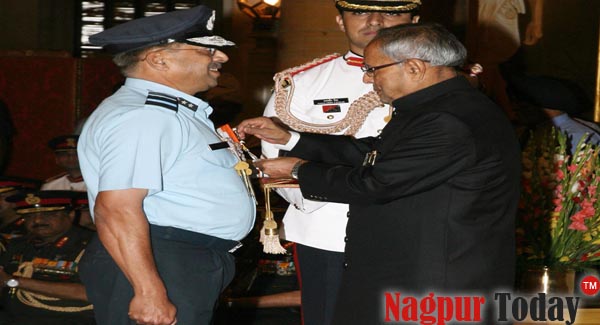 During 35 years of distinguished career, Air Vice Marshal Pande has undertaken important assignments of field and depot maintenance, training faculty and staff at Maintenance Command (MC) as well as Air Headquarters.  A post graduate engineer from IIT Kharagpur and alumni of Defence Services Staff College, the officer also holds a Diploma in Russian language.  Considered as a potential long term asset for IAF, the officer was trained in Russia on MiG-29 and Su-30 aircraft.  He was awarded ‘Vishisht Seva Medal’ in 2004 and ‘Commendation by Chief of the Air Staff’ on two occasions, in 1992 and 1995.The officer shared his in-depth domain knowledge and contributed effectively towards improvements to techno-logistics management of weapon systems operated by IAF.  During ‘Kargil Ops’ and ‘Op Parakram’, he ensured very high serviceability of combat war fighters as Senior Engineer at an operational base and Deputy Director at Air Headquarters, respectively.  During 2005-2007, as Chief Engineering officer of an operationally sensitive base in the South Western Air Command, he set in place effective maintenance support system for smooth operations of six fighter Squadrons.  He was also instrumental in conduct of large number of weapon trials to validate IAF doctrine.  As Senior Maintenance Staff Officer of an Op Command in 2008-09, he strengthened coastal air defence along the Sri Lankan coast line and attained 100% serviceability of surveillance radars, most of the time.

Since April 2010, as Air Officer Engineering Services at MC, the officer has ensured quality production at Air Force Base Repair Depots (BRDs).  He accepted the challenges due to shortage of import spares, by encouraging reclamation, innovations, life extensions and out-of-the-box solutions.  Under his guidance, induction of Medium Landing Helicopters and upgrade of AN-32 and MiG-29 aircraft are progressing well at various BRDs.  He has successfully implemented multi-disciplinary complex projects such as Lean Engineering, Quality Management Systems and Eco-friendly Disposal of Wastes at Units.  AVM Pande pursued self-reliance as a Key Result Area (KRA) and has been the leading driver and catalyst in infrastructure modernisation, indigenisation and formation of independent Indigenisation Depot.  Air Officer is a born leader, always led from front with utmost devotion.  His professional acumenship has resulted in savings of approximately 400 Cr in Foreign Exchange to IAF during 2010-2012.

For distinguished service of exceptional order, AVM DK Pande VSM is conferred for the award of ‘Ati Vishisht Seva Medal’.