42 OF 126 PASSING OUT TRAINEES ARE 2ND GENERATION FAUJIS 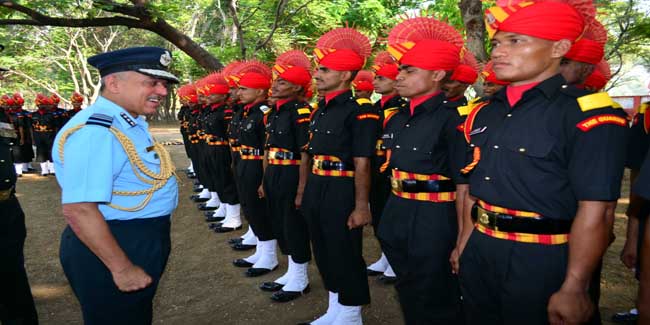 Air Marshal Jagdish Chandra interacting with the newly inducted Guardsmen at Guards Regimental Centre (GRC) Nagpur after Passing out Parade of 89th Recruits Course of the Brigade of the Guard.

Nagpur News: 126  Recruits of the 89 Recruits Course of The Brigade of The Guards attained status of a COMBAT SOLDIER at an impressive and solemn passing out and attestation parade. A colourful Ceremonial Parade was presented by these proud young GUARDSMEN, who are the newest additions to the ARMED FORCES FRATERNITY. These brave young GUARDSMEN have earned their status after sheer hard and strenuous training of thirty four weeks.  Keeping with the age old traditions, they were administered the oath of allegiance and devotion to duty by the Adjutant. 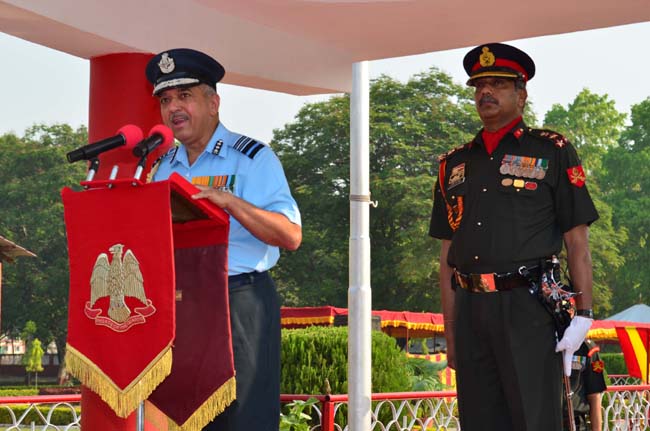 Air Marshal Jagdish Chandra addressing the Trainees at Guards Regimental Centre (GRC) Nagpur during Passing out Parade of 89th Recruits Course of the Brigade of the Guards on 09 Apr 2013 as Brig Satish N Wasade.

As they crossed the symbolic LAST STEP in slow march to the famous AULD LAYNE SANG tune of the band, these recruits formally attained the status of Combat Soldiers ready for frontline duties. Air Marshal Jagdish Chandra, Air Officer Commanding-in-Chief of the Maintenance Command, IAF reviewed the Parade. Addressing the Parade Air Marshal J Chandra said “It is a proud feeling for me as I review this parade where the turnout and the drill has been of exceptional standard. I feel more proud as 42 amongst the 126 trainees here are the second generation ‘Faujis’. You all have chosen the right career where your love for nation will find a whole new meaning. Here in the GRC, a foundation of faith, Discipline, Self reliance, patience, inspiration and knowledge of war fighting has been laid. You have to build on this foundation.  I am sure you will always do proud to your regiment”.

Medals were presented to outstanding Guardsmen in various disciplines of training. The coveted Overall Best Recruit Trophy was awarded to Recruit Vinay Kumar.   It was indeed a proud moment for the kith and kin of these recruits who had come from far flung areas to witness the eventful ceremony in which their wards participated.