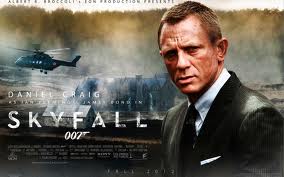 Based on
James Bond by Ian Fleming

James Bond will return” promise the closing credits of almost every film in the 007 franchise. Yes, but in what form? Set aside the series’s pulpy orthodoxies — the cars, the guns, the dames ,and Ian Fleming’s secret agent is something of a chameleon, either blending in with or cashing in on the movie craze du jour.

Skyfall, the often dazzling, always audacious new entry directed by Sam Mendes, is no different. For better or worse we live in the age of the superhero, and so Mendes’s film is less hardboiled spy saga than blistering comic-book escapade. The template here is Christopher Nolan’s The Dark Knight, a film that has almost singlehandedly reconfigured the modern blockbuster since its 2008 release, when it left Quantum of Solace bobbing in its wake.

We join Bond in Istanbul, chasing a stolen computer disk that contains the secret identities of embedded Nato agents. After a hair-raising chase across marketplaces, rooftops and a thundering train, the disk is lost, and for a moment so is 007. But after a gothic title sequence he rematerialises in London, older, unshaven and off his game. Nevertheless, M (Judi Dench) puts him back on the case, which takes him to some of the world’s most exotic corners: Shanghai, Macau, Glencoe…

Daniel Craig remains Bond incarnate, although six years on from Casino Royale he has become something more than a brawny cipher. There’s a warmth to his banter with pretty field agent Eve (Naomie Harris), the one-liners make a tentative return, and we even learn about the loss of Bond’s parents: the must-have back story for this season’s conflicted superhero.

Neal Purvis, Robert Wade and John Logan’s script constantly reminds us Bond’s physical prowess is on the wane, but his verbal sparring, both with M and new foe Raoul Silva (Javier Bardem), a former agent turned vengeful computer hacker, is nimbler than ever.

Silva is almost as inscrutable as The Dark Knight’s Joker himself: Bardem’s lip-lickingly camp turn makes him the oddest Bond villain since the Roger Moore era, and his nicotine hair flops queasily over his forehead in a way that calls to mind Julian Assange.

By acknowledging the rise of cyberterrorism in the same way Nolan played on the West’s new vulnerability in the wake of 9/11, Skyfall is a Bond film for the Anonymous generation.

Mendes, whose American Beauty and Revolutionary Road were light on explosions, lets the quieter moments breathe, and a conversation between Bond and Silva that’s simply buttered with innuendo drew cheers at an early preview screening. But Mendes is rather good at being loud, too, and his nine times Oscar-nominated cinematographer Roger Deakins makes the wildly ambitious action sequences the most beautiful in Bond’s 50-year career. (The release of Skyfall marks the series’ half-centenary.)

The sensational Istanbul prologue is soon bettered by the Shanghai segment, where Bond pursues an assassin through a soaring glass skyscraper lit up like a neon Aurora Borealis.

It’s pearls like these, not to mention the deliriously arch fight scene involving two komodo dragons, that give Mendes’s film enough momentum to power through its scrappy third act, when Silva’s diabolical plans start to feel a tad scattershot, even for a Bond villain.

“We don’t go in for exploding pens any more,” quips a fashionably tousled Q (Ben Whishaw). Nor do audiences, and I suspect Skyfall will be a stratospheric hit.

Go and Enjoy our True James Bond.Wish for great Sucess.