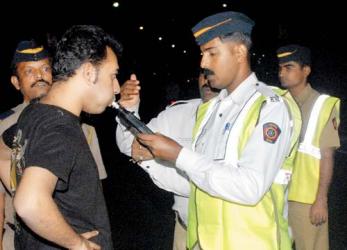 The breath analysers brought from Pune and special police forces on duty at particular spots in the city appear to have done their job of curbing and catching drunk drivers on New Year’s Eve pretty well. Many city revelers had to welcome the New Year from police lock- ups last night, as a total of 1157 people were caught driving in an inebriated condition on city roads last night.

270 bikers were booked only for drunken driving on the night of 31st December. Five drivers were also booked for the same reason. A staggering total fine of Rs. 1, 26, 200 was collected from drunk drivers in that one night.

Nagpur Police have once again appealed to the citizens to refrain from driving when drunk, for the safety of everyone driving on city roads.