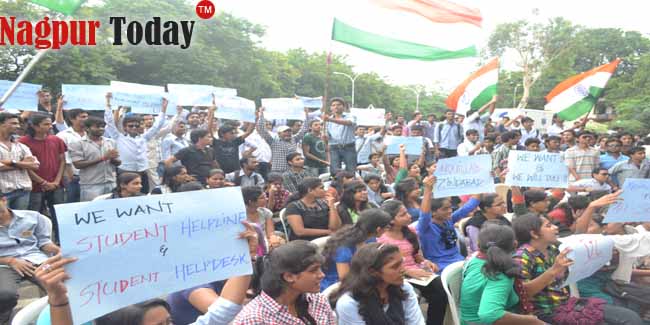 Nagpur News: The Rashtrasant Tukdoji Maharaj Nagpur University (RTMNU) has more recently come under bad light tarnishing its image like never before. The glorious history of Nagpur University has been eclipsed by the shoddy functioning concerned authorities and poor state of affairs at present.

The Aam Aadmi Party (AAP) has also joined the bandwagon of those who got the taste of RTMNU’s bitter state of affairs. The AAP in a letter addressed to the Vice Chancellor said, “The RTM Nagpur University has earned disrepute by not giving the results of the university exams in time and defective evaluation of the answer sheets of the various subjects. It causes great deal of financial and academic loss to the students. This is tantamount to gross deficiency in service on the part of the university as per the Consumer Protection Act, 1986. In this regard, we have already submitted several memorandums to the university and the Government as well, seeking improvement in the general administration of the university and making the university student-oriented,” the letter said.

It added, “It’s a matter of fact that all the universities in India and its states are run and governed by the rules and regulations laid down by the University Grants Commission. They are all substantially supported in respect of salaries of the employees, infrastructure and others grants, both by the Central and State Governments apart from the huge fees being recovered from the students. It reveals that the fee-structure being adopted by the various universities ought to be the same as far as possible.”

The letter mentioned, “It is very sad to say that last year RTMNU has made income of Rs. 56 crore only through the exam sections. After paying the hefty remunerations to the teachers involved in the examination duties, the University has Rs. 22 crore as a surplus amount. It shows that the university is being run only with a view to make money from the poor and the needy students from the downtrodden class of the society. This is undemocratic and unconstitutional. The college and university teachers had never demanded increase in their remunerations for their examination duties. It is their statutory duty to perform these duties. Ignoring the facts the university has callously and inimically increased the remunerations for evaluation from Rs 5 to 10 to 20 to 50 per answer sheet. This is only to appease and pamper the teachers at the cost and life of the students. Aam Aadmi Party will stand with the aggrieved students for the cause.”