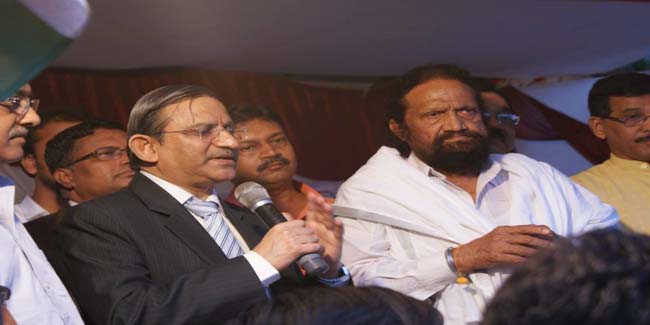 Nagpur News: Thirteen students have now gone without food for seven straight days at RBI Square protesting against the highest exam-fees in the country, inordinate delays in evaluation, and the University’s failure to take responsibility for its own lapses due to which students are suffering loss of their Academic Year, etc. Unfortunately it seems that lack of food is not the only sacrifice they must suffer. They have also had to face the disgustingly shameful spectacle of Politicians from all established political parties attempting to benefit from their troubles. University Authorities appear to be working in collusion with these elements to divide the students and thus extinguish the Student Movement. The pattern which has repeated itself on a daily basis with a different actor is one where each politician visits University Officials, then makes their way to the Protest Site at RBI Square to promise students that they should rejoice because he or she will get their demands fulfilled. This spectacle in fakery reached its pinnacle today when Jambuwantrao Dhote first promised to sit on fast for students’ demands yesterday (which never happened) and then promised to bring Vice-Chancelor Dr. Sapkal to the protest site. In line with the free for all among politicians to steal credit for a non-existent victory, there was also the bizarre spectacle of a two-bit BJYM leader staging a bogus celebration march at this time.

Dhote soon returned with VC Sapkal and in what was clearly an example of match-fixing, both individuals recited pre-scripted dialogues with Dr. Sapkal offering students the lollipop of AtKT/Conditional Carry-On and  Dhote attempted to sweet talk them into swallowing it. All the other demands relating to exam-fees, evaluation and re-evaluation delays, etc. were not addressed. AAP strongly condemns these shameful machinations of the University and these political leaders.

The Satyagrahi students of Nagpur, many of whom do not need a carry-on (contrary to the dis-information the University is spreading) however did not fall for these games and tricks and have resolved to continue with their Satyagraha. The Vice-Chancellor and Dhote then left the premises in a hurry ending today’s episode of their tamasha.

Aam Aadmi Party is proud to note the continued resolve of Anshankaris as well as the other students who are continuing their Satyagraha in a peaceful and non-violent manner. This is despite many provocations and attempts at inciting infighting by petty MNS, BJYM and Shiv Sena leaders and their supporters to divide and dishearten them. We hope that University officials will come to their senses soon and reform themselves at an early date instead of risking the fasting students’ lives further by indulging in cheap political skulldugge