The development pace in any society is not set into motion on its own. It requires appropriate ‘ignition’ to end up in generation of desired ‘illumination’ and ‘glow’, which results in the required ‘glitter’ to lighten the entire societal ethos. There are several emulative benchmarks which are observable on the sands of time which stand created by those devoted personalities who by their commitment cater to the cause of societal good in an emulative and exemplary manner, so as to set out worthy examples of their type for the posterity to there from derive required inspiration.

It is in this backdrop, that if one looks back at the core of development of ‘medical education’ in the region of Vidarbha in ‘general’ and Nagpur in ‘particular’ one has to take note of certain landmark contributions which have been carved out by leading individuals who have created a niche for themselves. Shri Ranjeet Deshmukh turns out to be one such ‘milestone’ in its own right which stands out heads above shoulders to proclaim with humility that his contributions to the cause of medical education and spread thereto is immense and is equally inspiring a saga of its own kaleidoscopic dimensions.

It’s a matter of common knowledge that city of Nagpur had every reason to boast for itself to have a ‘premier’ institution in the name of Government Medical College which for quite some time had the distinction of having the largest teaching hospital in Asia under its ambit and jurisdiction. The said institution has been the mother ‘repository’ of the trained health manpower of immense in the country in the big way including providing for esteemed and erudite teaching faculty for the cause of medical education across the country for last several decades.

Yet another college that came of into existence at Nagpur was the Indira Gandhi Medical College, which had Mayo Hospital as the teaching hospital under its ambit. To begin with the college was launched by the Nagpur Municipal Corporation, however, because of the various limitations, constraints and challenges the Govt. of Maharashtra had to took it over in the late 60s of the 20th century.

In addition to these two premier medical schools located in the civic limits and jurisdiction of Nagpur City, yet another medical college that cropped up in the region of Vidarbha was under the aegis of Kasturba Health Society at Sevagram District Wardha as a part of Gandhi Centenary Celebrations in 1969 and has been named as Mahatma Gandhi Institute of Medical Sciences geographically located at Sevagram in Wardha District in the State of Maharashtra.

Realising, the paucity of the avenues for the aspiring youth in the region of Vidarbha in the domain of medical and allied health sciences education Shri Ranjeet Deshmukh rose to the occasion to cater to the said strongly felt need through the Vidya Shikshan Prasarak Mandal in terms of an unaided medical college located in Nagpur named after his political mentor Shri N.K.P. Salve which is now known as N.K.P. Salve Institute of Medical Sciences and Research located on a picturesque site at Digdoh Hills, Hingna, Nagpur.

The avenue so generated by him under his able stewardship was not required to look back and has incessantly moved onwards on the path of growth and development and as on date it has emerged as one of the reputed and most sought after medical colleges in the country as a whole. It has not only turned out to be a core centre for medical education at all levels including the Graduation, the speciality the other parallel health sciences including dental sciences, nursing, physiotherapy and other allied health sciences, but also the attached teaching hospital has turned out to be a core health centre for secondary and tertiary healthcare services of all magnitude in an affordable manner.  This has gone a long way in fulfilling the requirements of providing avenues to the deserving youth for education in the domain of medical and allied health sciences at all levels and also the fulfillment of another requirement of providing easily available, accessible and affordable healthcare to the needy population not only in the region of Nagpur, geographically but also to the entire region of Vidarbha as a whole.

Realistically speaking development of a medical college in a desired manner catering to the core requirement of rendering affordable healthcare to the needy population was not an ordinary mundane task. It required grit, clarity, commitment, devotion, focused dedication and above all an attitude of catering to the cause of society in a cogent, credible and a meaningful manner, so that the void which was acutely felt is met with in terms of realistic and requirement fulfillment of legitimate expectations of the people at large totally in tune with the cardinal principle of ‘fulfillment’ of legitimate expectations of the population, which needed the same in a very strong and acutely felt manner.

The passion and the commitment with which Shri Ranjeet Deshmukh carried the mantle of responsibility on his stout shoulders on this count is impactful and inspiring, in as much, as he tided over the various challenges and constraints in a very deft, diligent and articulate manner and went ahead with the sole goal of fulfilling his cherished vision in a decisive manner with the approach of ‘come what may I shall, I will as I have decided that I will have to’. He lived to this very thoughtful analogy of his both in letter and spirit through his resultant contribution to the cause, growth and development of medical and allied health sciences education in Vidarbha and also providing for state-of-art healthcare facilities at an affordable price to the needy, poor and downtrodden population specially of Vidarbha Region whose welfare he harbors as a core commitment of all his public pursuits.

As a matter of fact, I had the privilege of knowing Shri Ranjeet Deshmukh for well over three decades and also have the fortune of catering my humble bit to his larger espoused cause of spread, growth and development of medical and allied health sciences education in Vidarbha and also providence of affordable healthcare services in several ways and therefore, in all humility I feel that I also got a lifetime opportunity of rendering my shoulder to his commitment of dispensing a large human task on the said count.

Indeed the resultant contribution which stands created as a result of this laudable initiative undertaken by him out of his sheer dynamism and successful accomplishment thereto makes him an ‘Iconic Contributor’ to the cause of medical and health sciences education in Vidarbha. Whenever, history on the said count would be computed by the posterity the role and contribution of Shri Ranjeet Deshmukh would invariably occupy not only a top position but a very huge and substantial space would be occupied by his unparalleled inspiring and exemplary contributions on these twin counts of larger public good.

He has to his credit a public life from early 70s till date which spans nearly to five decades, which are studded with sterling achievements, accomplishments and eye catchy contributions to the public good in wide and varied spheres through several erudite positions of power that he has held and has dispensed the responsibilities thereto in a manner which is a real emulative example for all concerned. Amongst his multi-faceted contributions, I as a humble worker in the domain of medical education would definitely has every reason to proudly salute his sterling contribution on these very counts, which will be ever remembered and cherished with gratitude and reverence for all times to come. I join all well meaning to salute him for his unparalleled onus that he dispensed to cater to the cause of medical and allied health sciences education and generation of state-of-art-healthcare facilities at an affordable cost for the needy population of Vidarbha, which stands out with radiance and brightness of its own class and type. May God bless him with positive health and continued determination for dispensing many more targeted responsibilities in times to come, which he and he alone can. 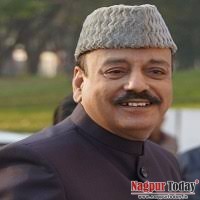