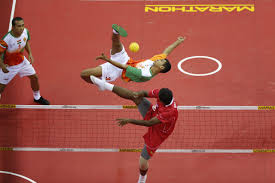 Nagpur Today :   The 5th edition of Rohan Ramteke Memorial Sepak Takraw Championship will be held on 5th January 2014,  Nagpur Sharirik Shikshan Mv’s ground. The opening ceremony of the championship will be held at 8.30 am and the chief guest for the function is Mr. Vipin Kamgar. The Guest of Honour at the opening ceremony are Mrs. Sunita Roy, Principal, Dinanath High School, Dr. Sukdev Biswas, Mr. Salim Baig, Dr. Y. V. Pande and Mr. Ramdas Ramteke, father of Late Rohan Ramteke.
The Tournament is conducted in memory of Rohan Ramteke who was a national player from nagpur and who met a watery grave at Chennai during senior nationals of sepak takraw. Total 20 teams are taking part in this championship.
Teams  interested in taking part in this championship can contact Dr. Ramesh Mandel (7841959721) and Mr. Javed Rana (9823262726)