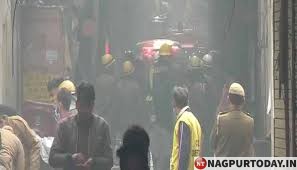 At least 35 people were killed after a massive fire broke out in a factory in Anaj Mandi area on Rani Jhansi Road in New Delhi on Sunday morning, police said.

A call about the fire was received at 5:22 am following which 30 fire tenders were rushed to the spot.

Over 50 people were inside the factory operating from a residential area when the blaze broke out, they said.

Police said 35 people were killed in the fire.

Many people trapped inside were rescued and rushed to RML Hospital and Hindu Rao Hospital, fire officials said.