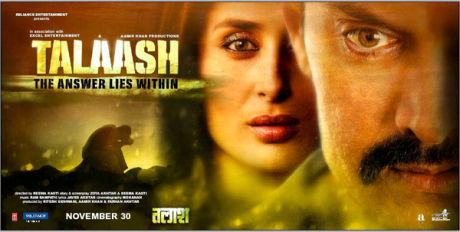 Nagpur Today Review : Seeing reflections of Mumbai under the red light, `Talaash` is a tale of love lost, fatal attraction and above all the quest to solve a perfect crime. Suspense at its core, `Talaash` explores Mumbais underbelly like never before.Inspector Surjan Singh Shekhawat(Aamir Khan) who receives a phone call early in the morning, informing him about death and an accident and how everything starts to unfold from there.The case turns into a life altering chase for Inspector Shekhawat when he is forced to reel under the repercussions of a broken marriage with his wife, Roshni,(Rani Mukherji) and come face to face with his suppressed grief. Being on his investigational quest and fighting it out with personal struggle, Inspector Shekhawat meets a sex worker Rosie (Kareena Kapoor) who further adds shades of mystery to the puzzle.What looks like a simple car accident investigation turns into a haunting mystery as further investigations show many anomalies linked to the victim`s death.

Reema Kagti’s ‘Talaash’ is a suspense thriller that not only boasts of a taut script but has a multi-layered structure that manages to pack in enough surprises to keep the viewer hooked till the very end. The storyteller’s craft lies in the fact that the modus operandi of the plot seems as intriguing as the motive of the crime.

Surjan Singh Shekhawat (Aamir Khan) is investigating the death of actor Armaan Kapoor (Vivan Bhatena) whose car seems to have suddenly veered out of control and plunged right into the sea. Considering the actor was neither under the influence of alcohol/drugs nor was he suicidal, the death throws up a lot of unanswered questions. The plot thickens when Armaan’s widow informs the police that the actor had withdrawn Rs 20 lakh on the day of his death, raising suspicion that he might have been a victim of blackmail or extortion.
One of the prime suspects in this case is a pimp and during the course of his investigation, Shekhawat meets a prostitute Rosy/Simran (Kareena Kapoor) who intermittently divulges credible information that helps the police make significant headway every time they seem to be reaching a dead end.

While the police are still trying to make a breakthrough in this complex mystery, we realize Shekhawat is a deeply conflicted man. He is struggling with suppressed grief and guilt since he lost his eight-year-old son. He also makes vain attempts to hold on to his troubled marriage as his wife Roshni (Rani Mukerji) tries to come to terms with her loss.

Nawazuddin Siddique stands out among the supporting cast with another compelling performance. Rani Mukerji as the bereaved mother essays an understated and convincing portrayal. Kareena is good as the flirtatious and slightly mysterious hooker. But Aamir Khan’s performance stands head and shoulders above the rest. He delivers a complex role with complete ease, one moment he is a ruthless cop and in the next, he is an anguished father grappling with his son’s death, vulnerable yet strong.

Zoya Akhtar and Reema Kagti weave an intricate narrative and deserve applause for the brilliant plot execution. For me, the success of any good film is measured by the degree to which it can engage the audience. In the climax when Shekhawat applies the emergency brakes, it is as if the viewer on their seat feels the sudden jolt, like they were on the backseat of his car.

The idea might not be strictly original but watch it for the way the story unfolds.

Talaash is a delight to watch, because of the surprises it throws at you and by the power-packed performances by its cast. Though the first half of Talaash is a bit slow, it’s still enthralling, absorbing and engaging. It is as we used to say in the old days – ‘a total paisa vasool’.