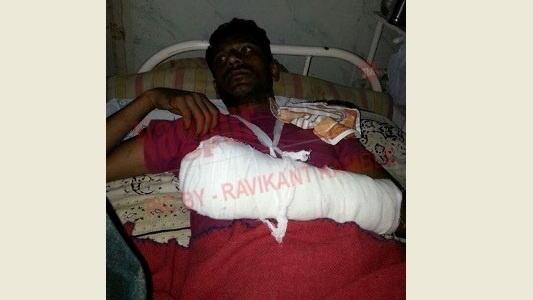 At midnight of Diwali the young man named Rahul Khokle aged 26 years, and a resident of Bajrang Nagar, Manewada Road went to his friend Yogesh Akode aged 24, to burst fire crackers. Yogesh was a lone resident of a flat in the same lane. The family of Ashtankar was the neigbours of Yogesh were also bursting fire crackers. A small argument over bursting the fire crackers started between the two neighbours. The argument turned violent. The family members of Ashtankar family including Sheshrao Ashtankar, Eknath Ashtankar, Balya  Gajanan Ashtankar , Panduranga Ashtankar, Panya Ashtankar entered Yogesh’s house and attacked Rahul Khokle with fist-blows and sticks.

Soon a small crowd of 50-60 people gathered there. Suddenly a member of Ashtankar family called a criminal called Suraj Jaiswal. Suraj Jaiswal soon came along with his friends and attacked Rahul Kokle with a sword. He first hit him with on his lower thigh. The second attempt was to hit his head. However, Rahul prevented the attack to his head and held on to the sword with his right hand.  After pushing the assailant, Rahul somehow made good his escape from there. He caught an auto and reached Government Medical College & Hospital. The doctors administered treatment to him and admitted him there.  The mob at the scene increased at Bajrang Nagar.  Yogesh Akode who was still at that vicinity, somehow entered his flat and locked himself in. Some onlooker informed the control room and soon the Ajni police arrived at the scene. A panchanama was conducted. When the police officials came to know about the sword attack of Rahul, they went to Government Medical College & Hospital to take his statement. Rahul in his statement gave details of the entire episode. He also told the police officials about the Ashtankar Family and Suraj Jaiswal. Ajni police registered a case only against the accused Suraj Jaiswal and his unknown accomplice under section 324, 34 of IPC.  However even after 48 hours no one was arrested.

What remains is still a mystery as to why the police are showing favour to the Ashtankar family. According to Rahul, the main culprits were the Ashtankar family. It was they who called Jaiswal. Yet no one from the Ashtankar family was arrested. Sources revealed that since the Ashtankars are a business family and have a big clout in that area,  the Ajni police could have succumbed to the pressure and are somehow trying to underplay the entire crime.  When Nagpur Today’s reporter talked to the Investigation Officer of the Ajni Police station, PSI Rajurwar,  he said that they are investigating the entire case. He added that when they had gone to the crime scene to investigate the case, they found that Suraj Jaiswal had indeed attacked Rahul with a sword. But there were no witnesses or statements confirming the role of Ashtankar family.  However he assured that they will leave no stones unturned in investigating the case and will arrest the accused as early as possible.

Meanwhile the family of Rahul Kohle and his family is living in constant fear and requested the police to arrest the accused as early as possible.