BJP, Congress leaders on one hand, and group of newspapers on other hand playing credit game for creating mass support 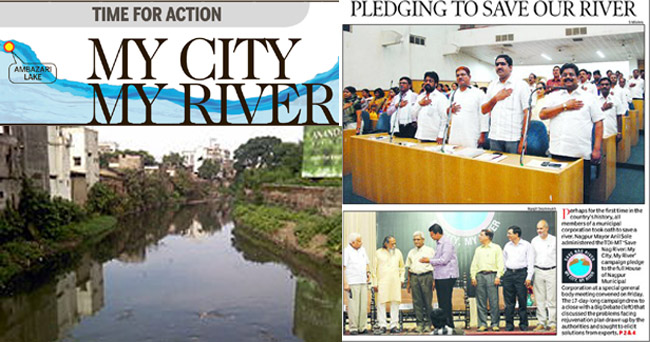 Nagpur News: A scholar had said: “Never get upset with people or situations both are powerless without your reaction”. But leave alone common man, many eminent personalities or even the newspapers have not understood the true and practical meaning of the scholar’s words. The disturbing result is: A fighting of a sort has been witnessed by the citizens of Nagpur over the Nag River (Popularly called Nag Nadi) issue. And the fighters in ring are people’s representatives of different parties, who never miss a chance to take credits for any good work, and the group of newspapers who are on bragging spree for revealing the source of Nag Nadi by them first. But surprisingly, the people’s representatives who performed “Muhurt” with much fanfare and planned to make Nag Nadi a clean and pollution-free are now-a-days are missing from the scene and so are the journalists. But credit game is going on and war of words, too.

However, the bitter truth is, the Nag Nadi will never take a shape of a full-fledged natural river.

Most of the group of newspapers in Nagpur are vying among themselves for credit for creating an awareness in the West Nagpur citizens for launching “Save Nag Nadi” campaign. But surprisingly, nobody is coming forward and assert positively that how the Nag Nadi in present condition will become a natural river with all beauty. Interestingly, only publicity-mongers were the persons who tried hard to hog limelight by getting photographed in the newspapers. No one among them came forward in true sense to save the Nag Nadi with dedication and determination.

Since the Bharatiya Janata Party (BJP) is the ruling party in Nagpur Municipal Corporation (NMC) the leaders in the party are on a race of a sort to grab the campaign for their vested interest. The BJP leaders are making efforts to promote the “Save Nag Nadi” as a boon for citizens and are planning to take advantage in the upcoming Lok Sabha polls on the citizen-oriented issue. But the goal seems a difficult one. On the other hand, a few Congress party leaders, who have assumed the BJP’s well-planned Nag Nadi issue as a setback for their party, have launched an intensive drive “Save Pili Nadi” to counter the BJP’s plan. The Congress move has been seen as a fiery fighting in a ring over “Save Nadis” issues.

Meanwhile, the Mayor Anil Sole, happy over massive support of citizens who hit the streets for BJP’s “Save Nag Nadi” campaign, has stated that the campaign for Nag Nadi will begin from May 1. The Mayor also saw a golden opportunity to project the Nag Nadi as an identity of Nagpur’s glorious history. He also appreciated the efforts to turn the Pili Nadi a beauty of Nagpur.

Similarly, the Minister Nitin Raut who represents North Nagpur Assembly constituency, has asserted that only making Nag Nadi clean and pollution-free will not add any glory to Nagpur City. All the rivers and sewer lines in Nagpur should and must be cleaned then only Nagpur can be said as beautiful city, Raut added. The Youth Congress in city, as per directive from Raut, raised the issue of cleaning the Pili Nadi for the benefit of citizens. Raut also asserted that there should proposals on purification of all the sources of water in city.

Meanwhile, the group of newspapers fighting for their existence, are trying to the hilt to prove they are superiors as far as public issues are concerned. In a war of words, the journalists among themselves from the group of newspapers, are claiming they have earned the right to creating public support on the issue.

The most unfortunate aspect of the episode is that the Nagpur Municipal Corporation (NMC) has raised its hands and said it will only coordinate among various strata of people in the work of cleaning and beautification of rivers in the city. Similarly, the Health Department of NMC is totally unaware of numbers of rivers and sewer lines existing in Nagpur. Because the NMC authorities never considered it necessary to keep the city clean and beautiful. Recently, when Dr Urkude was question by a citizen about the very poor condition of a sewer line on Koradi Road, Dr Urkude behaved in a manner as if how difficult the question is and stated the reason for not cleaning the sewer line due to lack of necessary machinery.

Now, the million dollar question is: Will it be possible the cleaning and beautifying the rivers and sewer line with the irresponsible attitude of NMC, and other personalities concerned? The answer is BIG NO. The NMC pays salaries to officials and employees of Health Department in lakhs but neglects the crucial issue.

One thing is certain: Unless the sanity prevails and NMC takes the responsibility the issue of cleaning and beautifying the rivers Nag Nadi or Pili Nadi for that matter will remain burning and take a shape of massive proportion. The all important issue could become a history if the men of matter keep silence and stay dormant.

War of words over cleaning and beautifying of Nag Nadi, Pili Nadi issues in Orange City