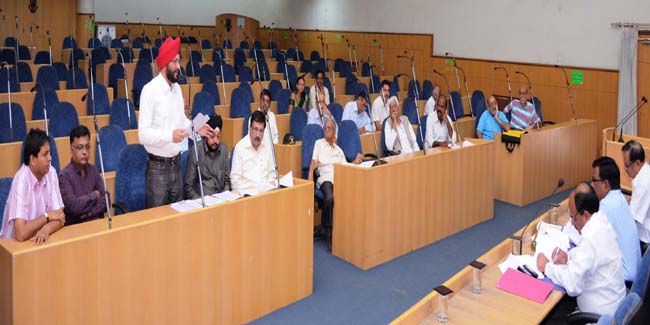 Nagpur News: Vidarbha Taxpayers Association (VTA) had submitted suggestions and objections in writing in the office of the Tax Assessor, Nagpur Municipal Corporation (NMC) called upon by public notice dated 17.11.2012 in regards to proposed imposition of property tax on the basis of Capital Value of property in place of present rent chart basis.

Another lacuna the said notification has is that under Rule 16(1) & 16(2) it is mentioned in GR that few examples based and worked out on the formulae is mentioned in the Appendix; however such appendix is not at all part of this notification nor it is available on website link of nmcpropertytax.com. This resulted in extremely weak number of public participation in the present case as it is impossible for taxpayer to understand the very basic calculation/formulae of tax assessment.

Renu said ready reckoner rates themselves not realistic & at majority of places they are too high and as far as they are utilized in case of sale and purchase by tax departments it is fine, since only those involved in transfer of property were attracted to this; now as per this GR all properties shall come under its ambit. Hence implementation of tax assessment on ready reckoner is illogical.

Renu alleged that admittedly for proper valuation many factors are considered by NMC however due to this multi factor theory proposed makes the entire procedure so complex that common man fails to derive actual & legitimate house tax. We have seen in the past and future can also be predicted with such multifaceted system wherein the tax assessor may assess a huge tax figure and after some settlement of personal interest the figure shall be lowered to actual figure. Such malpractices can only be controlled when system adopted is easy, all parameters are clear and transparent, whereby taxpayer can also calculate & be satisfied of the tax liability.

Renu said for rented properties it may be considered that a method be adopted wherein if the rent/lease agreement is registered, a sum of three months rent as house tax should be considered, because out of 100% rent received, 25% shall go as house tax, 10% for maintenance and 30% Income Tax. Therefore in other words the landlord income from rent ends with only 35% of the total rent received.

Attractive rebate should be offered to taxpayers if the tax is paid early. Current rebate offered is very low and does not attract taxpayers for the same. When Nagpur Municipal Corporation is charging 2% interest on delayed payment what restricts them to give similar rebate on receipt of tax paid earlier by taxpayers. This shall encourage taxpayers to pay tax well in advance.

Interest charged on delayed payment of tax should be reduced to 1% per month, as NMC is a civic authority formed to perform service for the citizens and is not at all a revenue generating authority. Interest charged by NMC for delayed payment is justified, however rate is highly objectionable and too high which is like Pathani Byaj, majority of assesses belongs to middle and lower middle class and taking this into consideration, interest rate should be gracefully reduced to 1% from existing 2% per month.