The high-profile son of high-profile Minister received 45004 votes out of 91417 votes polled. Similarly, Satyajit Tambe, nephew of Minister Balasaheb Thorat, stood second by pocketing 14553 votes. Kunal, another son of another Minister, Nitin Raut, stayed a distant third by getting only 4600 votes.

Nagpur News:  Vishwajit, the high-profile son of high-profile Minister Patangrao Kadam, scored a resounding victory and became President of Maharashtra Pradesh Youth Congress (MPYC) in a triangular fight for the prestigious post. Vishwajit Kadam received 45004 votes out of 91417 votes polled. Similarly, Satyajit Tambe, nephew of Minister Balasaheb Thorat, stood second by pocketing 14553 votes. Satyajit, who was Vice President in the outgoing MPYC Executive, was again declared the Vice President on the basis of votes he received. Kunal, another son of another Minister, Nitin Raut, stayed a distant third by getting only 4600 votes. Kunal, however, retained the post of General Secretary of the State Youth Congress by virtue of votes cast in favour. He too was on the same post in the last Executive. The number of invalid votes was counted at 1306. There were in all 47 candidates in the fray for 10 posts of the MPYC. 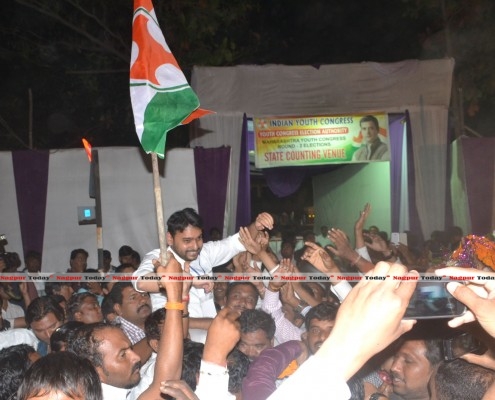 The counting of votes was held on Monday. The ballot boxes from the entire State were brought to Nagpur after elections to MPYC Executive for Assembly and Lok Sabha areas were concluded recently. The counting of ballots began at 11 am on Monday at the Sanskrutik Bhavan (Cultural Hall) situated in front of Mahavitaran (MSEDCL) Office on Katol Road. The supporters of each and every candidate aspiring to be MPYC President started gathering nearby the counting centre in small groups from across the State. All the groups were confident of victories of their candidates. All the candidates, too, were present at the counting centre.

The elections to MPYC, now-a-days, have been becoming a costly affair and the richer could only afford the polls. And the powerful but financially poor could not even dream of fighting the elections but were seen active and striving hard for richer candidates. This policy of Rahul Gandhi has forced the true and hardcore Congress workers to remain as it is. They are not moving forward. The loyal workers, by this rich-only policy of Rahul Baba, are seating in their homes or are on the verge of joining other parties. Such Congress workers, unless Rahul amends his policy, must be thinking of no work for Congress in future.

This election has made one thing clear. Vishwajit Kadam could now strongly stake his claim for Pune Lok Sabha candidature. On the other hand, Kunal Raut’s dream of candidature for Lakhni Assembly seat could be shattered. And even then Kunal aspires for Congress ticket, his father-minister Nitin Raut would have to make it a prestige issue.

MPYC election results withheld over objection by a candidate:

In the late development, the Election Officer, even though has announced the votes received by each of the 47 candidates in MPYC polls, has withheld the announcement of the results. According to information given to the candidates, the Election Officer said that a candidate has raised an objection. After the examination of the objection, the final decision would be taken. However, it will not make any difference to the final outcome.

More than 100 representatives of Youth Congress participated in the process of counting of votes. A total of 91417 votes were found valid and 1306 votes were found invalid. 47 candidates were in fray. The MPYC team comprises 1 President, 1 Vice President, 8 General Secretaries, and unlimited Secretaries. The SC and ST women candidates receiving over 210 votes can become MPYC Secretary and OBC/Minority Category candidates receiving over 410 votes can become office-bearers.

Vishwajit Kadam, while talking to media, said the MPYC will all out efforts to reach the Central Government’s people-oriented schemes to all people of the State and strengthen the Youth Congress. “The MPYC will throw its all might to fulfill the dream of Rahul Gandhi and bring Congress Government at Centre again. Congress party will field only capable candidates for Lok Sabha polls then it may be of Youth Congress.” Kadam refused to comment on his aspirations to be candidate from Pune Lok Sabha constituency. 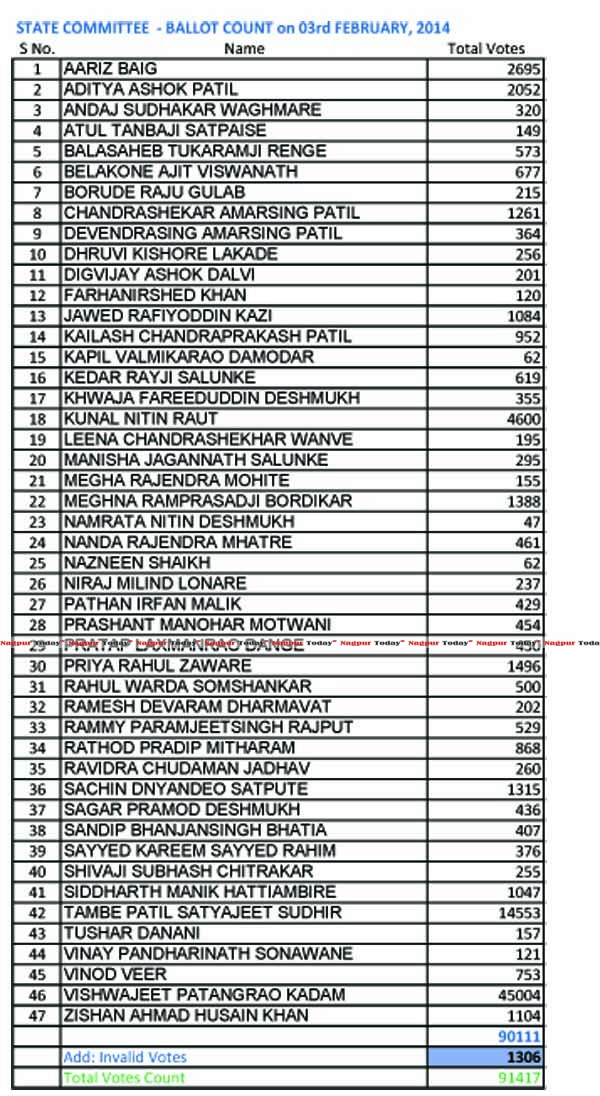