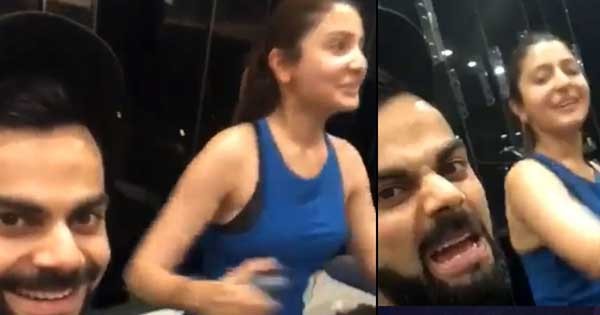 Virat Kohli posted a video recently of him training along with his wife, actress Anushka Sharma at the gym and we bet it will give you couple goals!

Soon after the wedding, Anushka was spotted rooting for Virat from the stands during the Indian Premier League 2018, where Virat Kohli was leading Royal Challengers Bangalore.

Virat and Anushka have a great bonding it seems, we have also seen Anushka wearing Virat’s T-shirts, just a testament to the close bond the couple share.

In the latest video posted by Virat Kohli in his Instagram handle, he introduces Anushka as the ‘boss’. Anushka is seen on the treadmill, she looks happy and so does Virat. It is a great pairing and we hope it continues this way.

Anushka is doing some cardio and Virat is motivating her, Virat says she can do more. It is just a way of giving her confidence. We also hear Anushka say ‘rubbish’, just the way she says it is oh-so-adorable. The highly-talked about video already has close to 6 lakh views in 60 minutes.

On the cricket front, Virat, who was supposed to play for Surrey CC this June will not be available because of a neck injury. Surrey CC is in talks with a couple of Pakistan players who could potentially replace Virat. Virat will also have to go through a fitness Test before he is available for the Ireland and England tour.

For Anushka, she has ‘Sui Dhaaga’, where she will be seen as the lead lady opposite Varun Dhawan.

Earlier, in the fag end of last year, the celebrated Indian captain Virat Kohli tied the knot with Anushka in a destination wedding that took place in Tuscany, Italy.