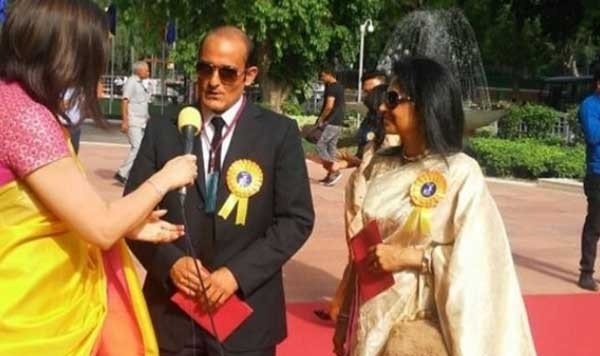 Vinod Khanna‘s family members, who were here to receive the Dadasaheb Phalke Award, conferred posthumously, at the 65th National Film Awards on Thursday, said it was a proud and emotional moment. Vinod Khanna’s wife Kavita was accompanied by son and actor Akshaye at the Vigyan Bhawan here to receive the honour. Ahead of the ceremony, Akshaye said, “It is very humbling as a son to be receiving this on his behalf. It’s a very proud and emotional moment for all of us.”

Meanwhile, Kavita told IANS, “It’s such a happy occasion and time of great pride for us, for the family, for all his fans and for everyone who loves him. There’s also a sense of his not being here to receive it. But I am so happy Akshay is going to receive it on his behalf… There can be no one better than Akshay to receive this on his behalf.”

The Dadasaheb Phalke Award is this year among the select 11 categories of honours distributed by President Ram Nath Kovind. The rest were given out by Information and Broadcasting Minister Smriti Irani and Minister of State for Information and Broadcasting Rajyavardhan Singh Rathore. ALSO READ: National Film Awards 2018: Janhvi, Khushi Arrive To Collect Late Actress Sridevi’s Award – See Pics

Vinod Khanna died last year following prolonged illness. He was 70. Honouring him with the Dadasaheb Phalke Award was a collective decision of the 65th National Film Awards jury, chaired by filmmaker Shekhar Kapur. The actor had starred in some of the biggest Bollywood hits like Mere Apne, Insaaf, Parvarish Muqaddar Ka Sikandar, Qurbani, Dayavaan, Mera Gaon Mera Desh, Chandni, The Burning Train and Amar, Akbar, Anthony. He also pursued a political career as the Bharatiya Janata Party (BJP) member of the Lok Sabha from Punjab’s Gurdaspur constituency and had also been a Union Minister in the Atal Bihari Vajpayee government. Watch this space for further updates.