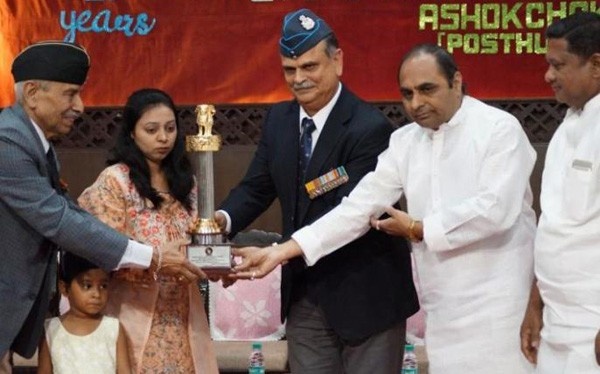 Nagpur: “The scourge of terrorism has reached to macabre level. With the attacks on schools, hospitals, religious places, the terrorists are planning to create divide and destabilise society. This new form of terrorism is a nasty design top brew anger against government and creates confusion against the army. Hence society as a whole should also be alert for safeguarding the nation and smash the terror,” said Kumar Shastri.

He was speaking as key speaker at a programme organised by Prahar Samaj Jagriti Sanstha to felicitate Veerpatni of Corporal Jyoti Prakash Nirala who single-handedly eliminating top leadership of Lashkar-e-Toiba (LeT) in Hajin area of Jammu and Kashmir last year. Despite sustaining bullet injuries, Nirala hit back killing three terrorists in the encounter in which the nephew of the Mumbai terror attack plotter Zaki-ur Rehman Lakhvi was also killed. For this act of outstanding bravery, Cpl Nirala was given Ashok Chakra Award, the highest gallantry award for bravery in peacetime, posthumously on Republic Day. This is for the first time when an Indian Air Force personnel has been conferred Ashok Chakra.

The event was organised at Maharshi Vyas Sabhagruha, Reshimbagh on Friday. The chief guest was Air Marshal (Retd) SS Soman, PVSM, AVSM, VM. Former MLA Mohan Mate was the guest of honour and Dr Kumar Shastri presided over the programme. Col Sunil Deshpande also shared the dais during the event.

Replying to her felicitation, Veerpatni Sushma Jyoti Prakash Nirala said, “To see his daughter in sky blue uniform of Indian Air Force was his biggest dream and after his martyrdom I will fulfil it.” The commitment of a wife to husband was clearly visible on her face when she was delivering the statement before the hall full of audience. Being the spouse of an Garud Commando gives a sense of pride and honour, but losing him in the battlefield is painful.

The chief guest Air Marshal (Retd) SS Soman also appreciated Sushma Nirala for her commitment and said, “We lost a brave soldier in the form of Cpl Nirala, however IAF is always with the family and the Veernaari.” Wife and daughter of Cpl Nirala were honoured with a memento and a cash prize of Rs 51,000 at the hands of Air Marshal Soman during the event.

The event commenced with screening of a short video that explained the brave story of Cpl Nirala. Dr Shastri also urged youth to join armed forces for the betterment of the country. He said, “Every citizen should contribute at their level to encourage their armed forces and keep belief on them.” A large number of IAF senior officials, ex-servicemen, NCC Cadets, students and others were present on the occasion.