In a shocking incident, bodies of a 22-year-old youth and his 14-year-old niece were found in the jungles of Badegaon, in Khapa area on Saturday night.

According to information, some villagers discovered body of the 14-year-old girl behind the hills of Shrikrishna Temple in Badegaon. On being informed, Khapa police reached the spot and performed panchnama of the body. During the preliminary investigation, the girl was identified as a Class IX student Tanushree Rajesh Masram, a resident of Bhuteshwar Nagar, Gangabai Ghat Road, Nagpur.

The incident took a ghastly turn when body of a youth was found hanging on a tree, 50-metre away from the spot where the body of the girl was found. Police rushed to the spot and started the investigation. The 22-year-old youth was identified as Nilesh Maroti Kirnake, a native of Badegaon. Bodies of both youth and the girl were sent to Government Medical College and Hospital after the local doctors rejected to perform the post-mortems.

According to police, Nilesh was living with his paternal sister for last 2 years. During his stay, he lured his 14-year-old niece into a love affair. Police surmise, the Nilesh might have had an argument, after which he reached Tanushree’s school on Saturday. Nilesh, out of revenge, picked Tanushree from school on his bike (MH 31 VS 9525) and killed her by strangulating her with a nylon rope, the cops suspected.

After the rage passed over, Nilesh, out of shame and guilt, hanged himself with the same rope on a nearby tree. However, the exact circumstances in which the incident took place are yet to investigated by the police. PI S K Dahale is investigating the case under the guidance of senior officer Dr Suryabhan Ingle. 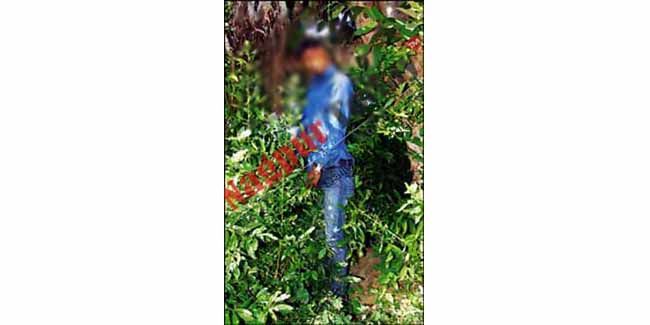