Nagpur News : Police are assigned in every part of the city with the ongoing winter session of State Legislature and yet it has failed to curb the ever-increasing crime rate in the city. Two more chain-snatching incidents were registered under the jurisdiction of Ajni and Ambazari police station on Thursday.

In the first case, two motorbike-borne robbers snatched away gold chain worn by a middle-aged woman on Hanuman Nagar Road. Deepali Pundlikrao Gulwade (35) was heading back her house at Rukmini Nagar on her scooty pep moped on Thursday evening. Two unidentified youths came from behind her and snatched her gold chain worth Rs 30,000 in front of Church, Hanuman Nagar Road. The robber sped away before Deepali could raise an alarm.

Ajni police have registered an offence on the complaint of Deepali and have started investigations in this regard.

Another middle-aged woman was targeted by two unidentified robber and relieved her of her gold chain worth Rs 50,000 under the jurisdiction of Ambazari police station.

According to information, Krishna Manish Sawal (38), was riding on her Activa moped when two unidentified came from behind on their bike (MH 30 W 997) and a youth snatched away her gold chain worth Rs 50,000 in front of Plot. 96, Shivaji Nagar. The accused sped away on their bikes.

Krishna rushed to Ambazari police station and filed a report against the robbers.

Cops have registered an offence under Section 392 in the both the cases and have started the investigations. 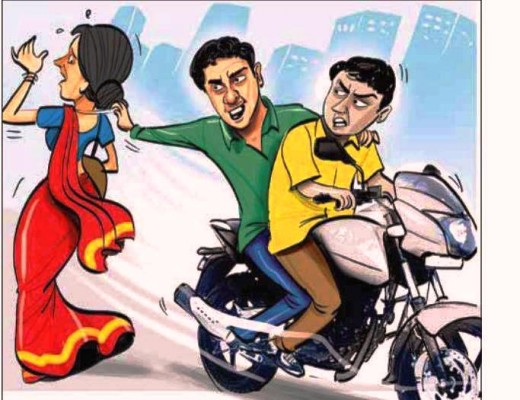