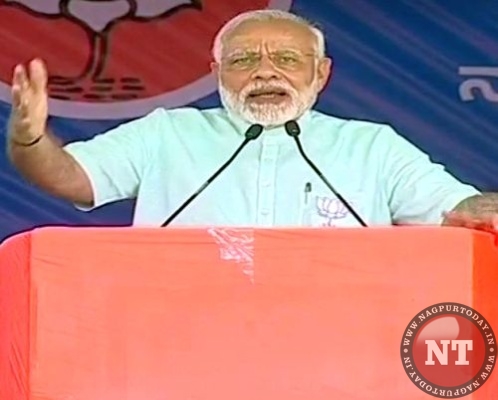 New Delhi: While on the campaign trail in Bidar for the hotly contested Karnataka Assembly elections, Narendra Modi on Wednesday yet again targeted Congress’ Nehru-Gandhi family when he claimed that no one from the party had bothered to visit freedom fighters Bhagat Singh and Batukeshwar Dutt when they were imprisoned during the Independence struggle.

According to prime minister’s website, Modi’s original quote also included Veer Savarkar in the list of freedom fighters. “When Shaheed Bhagat Singh, Batukeshwar Dutt, Veer Savarkar, greats like them were jailed fighting for the country’s independence, did any Congress leader go to meet them?” he asked. “But the Congress leaders go and meet the corrupt who have been jailed. Congress is supporting those who are corrupt. Such things cannot be accepted.”

Modi was possibly trying to play upon the ideological differences between Congress, which led a non-violent movement for freedom under Mahatma Gandhi, and Singh, who was a revolutionary. But as many historians and journalists pointed out on Twitter, Congress President Jawaharlal Nehru had in fact visited Singh and Dutt in prison. The two had been jailed for bombing the Central Legislative Assembly on April 8, 1929. Dutt was sentenced to life imprisonment, while Singh, who was later also convicted for killing British police officer John Saunders, was given the death sentence and executed on March 23, 1931 along with his aides Shivaram Rajguru and Sukhdev.

Go and read history before misusing it for politics. Nehru not only met them in prison but also wrote about them. Several Congress leaders defied Gandhi to speak for them. https://t.co/IMr2vTpSnW

There is no failure and there is no ‘research’ team. These lies, half-lies and falsehoods are willed and deliberate. Unlike that other Gujarati and Indian politician, Gandhi, this one will do anything at all to win an election. https://t.co/bhKep5G0aQ

Journalist Rajesh Mahapatra also shared Nehru’s statement on his meeting with Singh and Dutt. Twitter handle Indian History Pics shared a page which it claimed was from Selected Works of Jawaharlal Nehru Volume 4, in which the Congress leader wrote about his prison meeting with the two.

1.Nehru visited them in Lahore jail on Aug 8,1929.
2.And published their defence statement in Congress bulletin
3.Asaf Ali was their lawyer and defended them in court.

Dear @narendramodi,
1. Congress leaders' visits & support to revolutionaries are as amply documented as the treachery of your ideological predecessors is. Their lawyer was a Congressman
2. We never visited jailed corrupt Yeddyurappa or the Reddy brothers
3. Read before you rant! pic.twitter.com/aq88P1rtoD

Another Twitter user pointed to the Rashtriya Swayamsevak Sangh’s lack of involvement in the freedom struggle, which has been a sticking point for Modi’s Bharatiya Janata Party, and the controversies raised over the prime minister’s graduation degree. The RSS is the ideological parent of the BJP. Some also pointed out comments made by Rashtriya Swayamsevak Ideologues about revolutionaries like Singh, while taking a swipe at Modi’s Master’s degree in “entire political science”.

Modi’s lack of knowledge about this well-documented meeting, and his frequent attacks on Nehru – he has repeatedly tried to vilify the former prime minister and has held the Congress responsible for much of what ails modern India – also inspired some Twitter humour.

Signs of desperation? What did the RSS have to do with the Freedom Struggle is the real question for which even a degree in "entire political science" cannot give you an answer. https://t.co/mXssSuRZ8F

"Patriotism is not only going to prison. It is not correct to be carried away by such superficial patriotism."

– Hedgewar’s comment in his biography on Bhagat Singh. https://t.co/QsgpZvv8XR

Pic 2 : This is what RSS supremo Golwalkar used to think about martyrs . pic.twitter.com/T20kseBz3O

Typical dirty trick by Congi Nehru to sneak off to Brostal jail in Lahore to meet Bhagat Singh without telling Modi ji. Must be some Paki conspiracy to defeat Modi ji in Karnataka.

Country’s PM or that whining neighbourhood auntie? Never before politics has been reduced to such petty personal level.

The prime minister has been called out several times for getting historical facts wrong. He had previously claimed that the Konark Sun Temple was built 2000 years ago (it was actually built in the 13th century). In that same speech, he also claimed that the sculptures of women on that temple showed them wearing skirts and carrying handbags like modern women. In February 2014, he had implied that Bhagat Singh had been interred in the Cellular Jain in Andaman and Nicobar Islands, when in fact he’d been jailed in Delhi and later Lahore. Several other inaccuracies in his speeches have also been pointed out.