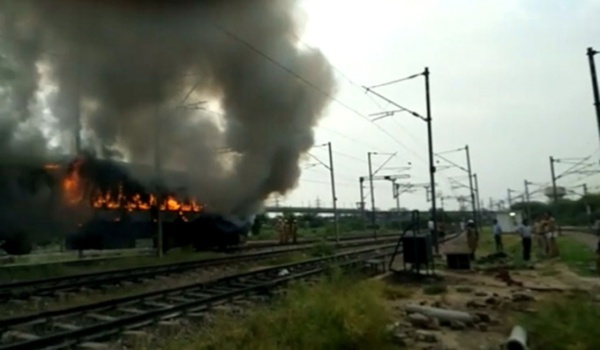 Betul: A goods train carrying 90 Army jawans and some explosives caught fire while passing through Madhya Pradesh on Thursday. While there were no injuries reported, four Army trucks laden on to the wagons were completely gutted in the blaze.

The train, on which the trucks carrying army paraphernalia were loaded, was moving towards Faizabad in Uttar Pradesh from Bengaluru.

According to officials, the goods in the train suddenly caught fire as the train was passing between Dharakhoh and Maramjhiri in Betul district. Soon, policemen along with fire tender vehicles from Betul were rushed into service and after several hours of toil, the fire was doused.

Sources claimed that the train caught fire after the over head equipment (OHE) supply line broke down and the loose cables fell on the train.

As a precautionary measure, trains approaching the site were halted at Betul and Amla railway stations.

Sources claimed that the other bogies of the train which did not catch fire, were carrying explosive material. Army jawans successfully shunted these coaches out from the portion of the train that was on fire.

Over a dozen trains running on the Nagpur-Itarsi track have been affected. Efforts are on to resume rail traffic to normalcy.